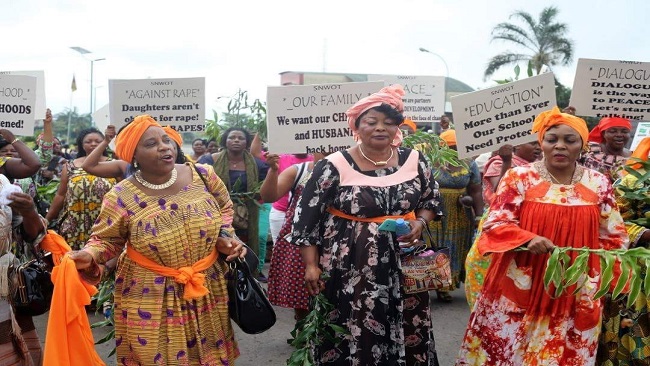 Women of Cameroon Rise Above the Killing and Havoc 0

A widespread notion persists: that women, when compared with their male counterparts, are more naturally inclined towards peace. A woman is a full circle and within her is the power to create, nurture and transform. Over the years, there has been an increasing need for recognition of women’s efforts in conflict resolution by the international community, which resulted to a call for the incorporation of women in peace processes and fostering of equality, empowerment, democracy, poverty eradication and development. U N Security Council Resolution 1325 was the first formal and legal document to prevent violation of women’s rights and support women’s participation in peace processes.

African nations have been ravaged by conflict, resulting in destabilization, displacement and infrastructural destruction, all of which have gender-specific consequence. Recently, a wave of violence broke out in the English-speaking regions of Cameroon.

The impact of the anglophone crisis on Anglophone women has been severe. While conflicts inflict suffering on everyone, women are particularly affected by its short- and long- term effects. Sexual assault and exploitation are frequently employed as tools of war; victimization leads to isolation, alienation, prolonged emotional trauma and unwanted pregnancies that often result in abandoned children. Women can play active roles in the events that lead to fighting and instability, and even in combat itself- yet they have also served as the forerunners of peace movements that have ended conflicts.

Although conflicts affect every member of the society in varying degrees, women are naturally more prone to negotiate for peace than men, and in achieving this, women devise all available strategies and resources within their reach to mediate and resolve conflicts for peace to reign.

For instance, in order to achieve peace processes women, go as far as holding prayer meetings, marches, night vigils and in some cases withhold sexual services from their partners or shamed authorities into negotiating by appearing naked in public demonstrations, which has cultural implications in some African cultures.

Aristophanes in his play Lysistrata and Bole Butake, in Lake God, paint a similar scenario where women go on a sex-strike to draw the men’s attention to their plight. The extent to which women devise both formal and informal initiatives to bring about peace shows that women are a formidable force to reckon with in mediation and conflict resolution and must be well integrated in these processes.

Women are not the problem. They are the solution. With the security situation fast deteriorating in the two English speaking regions of Cameroon, a group of courageous women has emerged. Under the banner of Southwest and Northwest Women’s Task Force, individual women and their counterparts in the civil society are mobilizing and campaigning for the end of the Anglophone crisis. The women have decided to give a helping hand to State authorities in the search for long lasting peace in the Anglophone regions. They are demanding a ceasefire and meaningful participation to finding sustainable peace to the violent conflict.

In a patriarchal society like Cameroon’s, their task is not easy. Besides holding press conferences and marches, recently, they have successfully mobilized thousands of women to participate in two lamentation exercises in Buea and Bamenda. This is a cultural practice to show extreme displeasure by publicly wailing to draw the attention of elders, particularly men, forcing them to take appropriate action. The women appeal to talks and dialogue because according to them, these are the main points that will help reunite the two warring parties.

“There is no limit to what we, as women, can accomplish”, says Michelle Obama, reason why various religious groups like the Christian Women Fellowship of the Presbyterian Church, Christian Women Association of the Catholic Church and Baptist Women and traditional women groups like ‘Ma Awu” in the Manyu division, “takumbeng” in the North West region, Special Neighbors in Mile 16, Buea and other women groups, have all employed several strategies to resolve the conflict and bring peace. These women have used love, tenderness, care, concern, soberness, understanding, tolerance, politeness, patience and truthfulness. There’s also been sensitization through organization of seminars and workshops to educate the population on peace, peaceful protests/march pass with peace plants, reach out, advocacy and preaching, prayers and night vigil, traditional measures such as willful exposure of their nudity, dialogue and advice.

Within the context of the Cameroon anglophone crisis, women play important roles in the process of conflict resolution. Firstly, as activists and advocates for peace, women wage conflict non-violently by pursuing democracy and human rights. Secondly, as peacekeepers and relief aid workers, women contribute to reducing direct violence. Thirdly, as mediators, trauma healing counsellors and policy makers, women work to “transform relationships” and address the root of violence. Lastly, as educators and participants in the development process, women contribute to building the capacity of their communities and nations to prevent violent conflict. Emily Taft once wrote that if women understood and exercised their power, they could remake the world.

If a lasting peace must be achieved in Cameroon, then it won’t be without the participation of women and the inclusion of gender perspectives and participation in peace processes. Women must play a most significant and substantive role in making the transition from the culture of violence to the culture of peace.

Historical chronicles and modern international law theories have documented the role of women in wartime only by identifying women as victims of rape and other sexual atrocities.

This has somewhat changed recently, with resolution 1325 having both a meaningful and symbolic impact on women around the world; this has transformed the image of women from being exclusively victims of war to being active participants as peacemakers, peacebuilders and negotiators. This change recognizes the value women can bring to conflict resolution. While women need to be present at the negotiation table and their voices need to be heard and considered in conflict resolution process, we must also remember that when it comes to curing society’s ills and working towards the elimination of war and violence. Women are not alone. Like the Chinese proverb suggests:

“Women hold up half the sky, but we must work with those who hold up the other half.”

Written by:
Felix Agbor Nkongho
Executive Director
Committee for the Defence of Human Rights in Cameroon