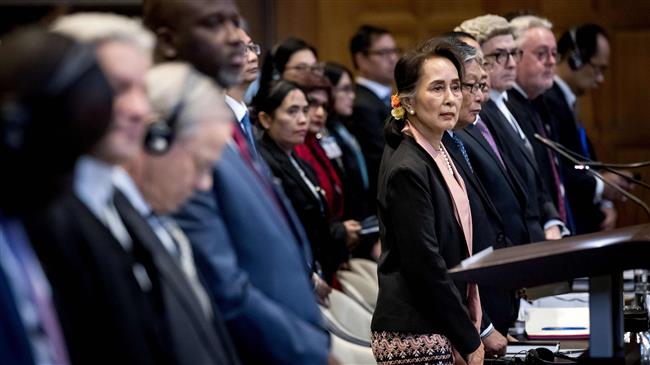 The International Court of Justice (ICJ) has launched genocide hearings against Myanmar, as the first major legal attempt to bring the country to justice over horrific atrocities committed against Rohingya Muslims.

The three-day hearings in the United Nations’ top court kicked off at The Hague on Tuesday following a November lawsuit filed by the West African country of Gambia.

Acting on behalf of the 57-nation Organization of Islamic Cooperation, Gambia called on the ICJ to take emergency measures to halt Myanmar’s “ongoing genocidal actions” against the Rohingya.

“All that The Gambia asks is that you tell Myanmar to stop these senseless killings, to stop these acts of barbarity that continue to shock our collective conscience, to stop this genocide of its own people,” Gambian Justice Minister Abubacarr Tambadou told judges on Tuesday.

Demonstrations have been planned outside the court and across the Dutch city against and in support of Myanmar’s de facto leader, Aung San Suu Kyi, who attended the tribunal.

Rohingya Muslims, recognized by the UN as the world’s most persecuted minority group, are denied Myanmarese citizenship as the country’s leadership brands them as “illegal” immigrants from neighboring Bangladesh, which, for its part, says they are from Myanmar.

A military crackdown that began in 2016 saw thousands of the Muslims being killed, injured, arbitrarily arrested, or raped by Myanmarese soldiers and Buddhist mobs.

After the initiation of the military campaign that the UN itself has already said was perpetrated with “genocidal intent,” more than 730,000 members of the minority fled Myanmar’s northwestern state of Rakhine to Bangladesh. They have largely been camped in the country’s southern district of Cox’s Bazar in squalid conditions.

Myanmar has repeatedly justified the crackdown on the Rohingya Muslims in Rakhine and insists its own committees are adequate to investigate allegations of abuse.

Suu Kyi, a Nobel “Peace” Prize winner now in the dock at the World Court, refused to stop or take any action against the military and the Buddhist mobs.