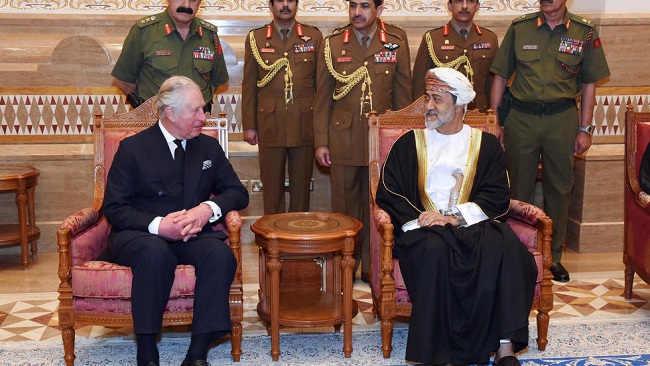 Britain’s Prince Charles and Prime Minister Boris Johnson joined regional leaders in Oman on Sunday to offer their condolences to the royal family after the death of long-reigning Sultan Qaboos.

Former French leader Nicolas Sarkozy was also in attendance at the ceremony, which took place a day after the new royal ruler Haitham bin Tariq was selected and sworn in.

Haitham is a cousin of Qaboos, who never married and died Friday at the age of 79 without an heir apparent.

It was Sultan Qaboos’ policy of neutrality and non-interference that elevated Oman’s standing as a “Switzerland of the Middle East” and won it respect in the region and beyond.

It maintains healthy relations with the United States as well as with regional powers Iran and Saudi Arabia, in what many diplomatic observers see as a model of balance.

Sultan Qaboos, who ruled for half a century, came to power in 1970 when he overthrew his father in a coup with British support.

As a young man, he attended Britain’s elite Sandhurst Royal Military Academy, after which he joined a British infantry battalion in Germany.

British premier Johnson is to meet with the new sultan and senior Omani officials during his visit, his office said in a statement.

“The UK and Oman have a broad and long-standing bilateral relationship that goes back over 200 years,” it said. “Our countries have deep economic ties and shared defence and security interests.”

As ruler, Qaboos modernised his country but also forged a broader role as a go-between in regional and international crises.

Under his reign, Oman refrained from taking sides in the Saudi-led blockade of Qatar as well as a military intervention in Yemen led by Saudi Arabia and the United Arab Emirates.

The sultan’s death comes amid increased tensions between Tehran and Washington, following the US killing of a top Iranian commander in Iraq that raised fears the region was sliding into war.

The late sultan’s standing has been recognised with warm tributes from across the world, including from US President Donald Trump who said Qaboos was a “true partner and friend to the United States”.