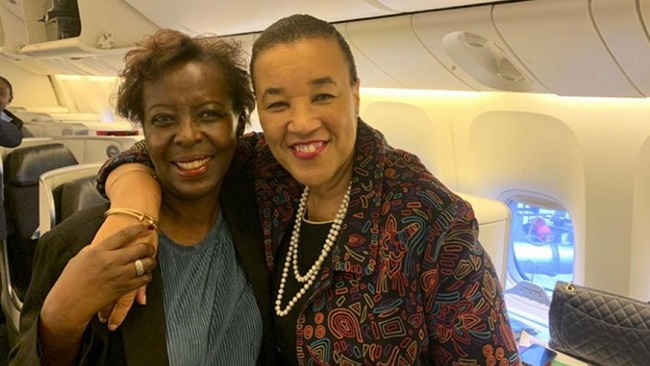 A senior figure within the Southern Cameroons Interim Government in Ground Zero has cast doubt on the recent peace mission by the leaders of the Francophonie, Commonwealth and the African Union to French Cameroun, calling the much-publicized visit of Moussa Faki Mahamat of the African Union, Patricia Scotland of the Commonwealth and Louise Mushikiwabo of the Organisation Internationale de la Francophonie to Yaoundé a NollyWood movie staged by the French government of President Emmanuel Macron.

The President Sisiku Ayuk Tabe top aide (names withheld) made the comment in a conversation with our Yaoundé city reporter late on Thursday.

The three leaders announced to the world that they were satisfied with the Major National Dialogue and the dubious actions taken by the Biya Francophone regime to end the war in Southern Cameroons.

When asked whether the chief diplomats of the African Union, the Commonwealth and the Francophonie really gave the necessary push required to achieve peace in Southern Cameroons, the Ambazonian leader noted that the mission to Yaoundé was a movie staged by supporters of the French Cameroun regime within the European Union.

Asked why none of the trio never met with the jailed Ambazonia leaders, the Sisiku Ayuk Tabe adviser said, it was indeed shameful, disgusting and disgraceful to the entire Commonwealth, Francophonie and the African Union.

Many on the streets in Southern Cameroons opined that the so-called high-powered delegation came to Cameroon for tourism. A teacher in GBHS Molyko said that all what the international civil servants painted in their final joint press release ranges from plain fiction to the most absurd.

The visit came a few days after the Ambazonia Vice President Dabney Yerima appointed the governor of the Bank of Ambazonia.

Elsewhere in the conversation, the President Sisiku Ayuk Tabe aide lashed out at the Commonwealth, the Francophonie including the African Union for keeping corrupt and celebrated bribe takers as their leaders who are basically providing political support to the French Cameroun terrorists’ army in Southern Cameroons.

The level of barbarism being perpetuated by the French Cameroun military and government militias as they pursue their genocidal war and scorch earth policy to completely annihilate the Southern Cameroons (Ambazonia) is alarming. So far, as a result of the on-going genocide in the Southern Cameroons (Ambazonia), an estimated 20,000 people have been killed, over 280 towns and villages have been burnt down, over 120,000 people are seeking refuge in Nigeria and further afield, over 1million people are internally displaced or living in bushes and over 3,000 persons incarcerated in prisons and detention facilities. It is also reported that over 4.5. Million people are at risk of famine. One thing we know for sure is that these internationally acknowledged crimes as recorded by the International Crisis Group, the UN and the renowned Human Rights Watch did not feature in the communiqué that was made public by the leaders of the African Union, Commonwealth and the Francophonie.