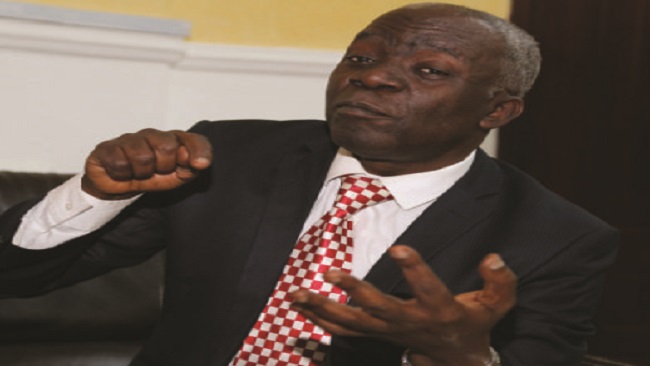 Lagos lawyer, Mr Femi Falana, speaks on the controversial deportation of the leaders of Southern Cameroun, some of whom he described as naturalised Nigerians and led by Ayuk Julius Tabe, from Nigeria. Femi Falana The Cameroon government announced recently that leaders of the Anglophone movement, led by Mr Julius Ayuk Tabe in Nigeria, were handed over to Cameroon. How did this happen? It is true that a number of Cameroonian refugees and asylum seekers, who were illegally arrested and detained by the Federal Government, were arrested and deported from Nigeria to Cameroon on Friday, January 26, 2018.

When we received information of the plan to deport them, we rushed to the Federal High Court to stop the illegal plan. We also reached out to the Comptroller-General of Immigration, the Minister of Foreign Affairs and the Office of the United Nations Commissioner for Refugees in Nigeria. As soon as the Commission confirmed the information, it dispatched a letter to the Federal Government pointing out that Nigeria had a legal obligation under international law not to deport the detained Cameroonians. But in a demonstration of reckless impunity, the National Security Adviser, Major-General Babagana Monguno (ret.) deported our clients in defiance of the intervention of the United Nations and the pending suit in court.

Out of shame, the National Security Adviser could not disclose the deportation of our clients from Nigeria but the government of Cameroon decided to celebrate the deportation and threatened to prosecute our clients for terrorism. I have protested the deportation to President Buhari and demanded that our clients be returned to Nigeria without delay. You were one the lawyers mentioned in the case. What role did you play? My learned colleague, Mr. Abdul Oroh, is handling the case with our law firm. Both of us were at the High Commission of Cameroon last (penultimate) Tuesday to demand for access to our clients who are currently held incommunicado in Cameroon. We were asked to submit a letter to that effect and we have done so.

Does Nigeria have any extradition treaty with Nigeria? What laws were respected and what laws were violated? Nigeria has no extradition treaty with Cameroon. For that reason, the Federal Government could not file extradition proceedings in any local court. Hence, the deportation was carried out outside the ambit of the Extradition Act. No law was respected whatsoever but many laws were breached by the Federal Government which has continued to exhibit authoritarian tactics and rule of might under a democratic dispensation that is supposed to be anchored on the rule of law. In deporting our clients, the Federal Government violated Section 1 of the National Commission for the Refugees Act which prohibits the expulsion, extradition or deportation of any person who is a refugee to the frontiers of any country where his life or freedom would be threatened on account of his membership of a particular group or political opinion or whose life may be endangered for any reason whatsoever. The Federal Government also breached the human right of our clients to enter Nigeria, reside, seek and obtain asylum as   guaranteed by Article 12 (3) of the African Charter on Human and Peoples’ Rights (Ratification and Enforcement) Act. The Act further provides that every individual shall have the right, when persecuted, to seek and obtain asylum in other countries in accordance with the laws of those countries and international conventions. Apart the violation of those laws, the Federal Government breached its legal obligations under the 1951 United Nations Convention Relating to the Status of Refugees and the 1969 Organization of African Unity Convention on Refugees which guarantee the rights of refugees and asylum seekers in Nigeria to protection. Among those said to be arrested were those having Nigerian citizenship and working here; and others with refugee status or seeking same. What does this scenario tell us about the Buhari administration? We have established that three of the deportees are naturalized citizens while others are recognized refugees and political asylum seekers in Nigeria. Twelve of our clients who are the leaders of the people of Southern Cameroon have been living in Nigeria for several years. Some are lecturers at the Ahmadu Bello University and the American University in Yola. Three of them are lawyers. Those who are not refugees among them have been granted permanent residency status in Nigeria. You can only expel a foreigner from your country if he violates the law. Even then an asylum seeker cannot be turned over to the authorities of a country that is likely to persecute him. Under no condition can a Nigerian citizen be deported from the country. The only time that a Nigerian citizen had been deported was in 1980 when the Shehu Shagari regime expelled Mr. Shugaba Abdulraman Darman and dumped him in Chad. The deportation was declared illegal by the High Court which ordered the Federal Government to bring him back to the country. The court also awarded damages in favour of the deportee.

The illegal deportation of the naturalized Nigerians and the refugees has caused a huge embarrassment to the Federal Government because there is no legal justification for it. Can you believe that the National Commission for Refugees, the Immigration Department and the Ministry of Foreign Affairs were not consulted before the deportation of our clients was carried out? Some people look back from the arrest and transfer of Charles Taylor under Obasanjo, to the inaction of Jonathan when Libya was under attack and now transferring people who fear for their lives to a government they are running away from and the question of Nigerian leadership in Africa. What do you have to say? It is trite that the foreign policies of a government are dictated by its domestic policies.

The case of Charles Taylor is totally different from this one. The Special Court for Sierra Leone set up by the Security Council of the United Nations had issued a warrant for the arrest of the ex-Liberian president for crimes against humanity. Nigeria was under a duty under international law to turn him over to the court. But unknown to Nigerians and the international community, President Obasanjo did not want Mr. Taylor arrested in Nigeria. As President Obasanjo, who was then in the United States, was under pressure to hand over Mr. Taylor to the court, as a precondition for meeting President George Bush, he quickly directed the Immigration to allow the fugitive to leave the country. But as Mr. Taylor was rushing out of the country, he was arrested at Damboru border in Borno State at about 6 am on March 2009 by Mr. Sylvester Umoh, a Customs officer who was committed to his duty. Even though Mr. Taylor offered to bribe him with $500,000 cash, Mr. Umoh rejected it and arrested him. That was how Mr. Taylor was handed over to the Special Court to the embarrassment of President Obasanjo.

The Federal Government then descended on Sylvester Umoh. Instead of giving him a national award, he was dismissed from the service without ignominy. Although I succeeded in ensuring the conversion of Mr. Umoh’s dismissal to retirement in 2014, we are still battling with the payment of his entitlements. Again, the Libyan case is different from this case but it also demonstrated a failure of leadership. Both President Goodluck Jonathan and President Jacob Zuma of South Africa did not have the courage to challenge President Barrack Obama over the planned invasion of Libya. In fact, the representatives of both leading African nations voted for the invasion. Both Nigeria and South Africa betrayed Africa by endorsing the invasion of Libya. In particular, the strategic interests of Nigeria were not considered by the Jonathan administration. Hence, we have paid dearly for the barbaric invasion of Libya. Apart from the slave trade that President Gaddafi would not have allowed in Libya, the arms and ammunition looted from the armoury of Libya were bought by the Boko Haram sect to launch deadly attacks on Nigeria.   Just like the nation is messed up locally by a cabal of primitive power mongers our foreign affairs have been ruined by the same reactionary group. Luckily for the cabal, Nigerians are not aware of the extent of the manipulation of our foreign affairs. Can you believe that the cabal almost smuggled Morocco into the Economic Community of West African States? The other day, Nigeria lost an important position contested at the African Union because the cabal insisted on a candidate who was alleged not qualified for the post? With the controversial appointment of the Director-General of the new National Intelligence Agency, it has been proved beyond any shadow of doubt that the cabal will continue to expose the country to ridicule. With the international standing and experience you have. is there any role you think Nigeria can play in resolving the crisis in Cameroon? Frankly speaking, Nigeria can resolve the crisis in Southern Cameroon in the interest of regional stability.   Notwithstanding that Nigeria negligently gave out the Bakassi peninsula to Cameroon, Nigerians in the island are still being harassed by Cameroonian gendarmes. As far back as 2002, the Federal Government had opted for a peaceful resolution of the political crisis in Cameroon. When the people of Southern Cameroon filed a suit at the Federal High Court to determine whether they are not entitled to self-determination within their clearly defined territory separate from the Republic of Cameroun, the Federal Government decided to settle the case out of court. Hence, by a consent judgment delivered by the Court on March 5, 2002, the Federal Government agreed to file a suit at the International Court of Justice to have a judicial confirmation of the human right of the people of Southern Cameroon to self-determination.

The Federal Government also undertook to take other measures as may be necessary to place the case of the people of Southern Cameroon for self-determination before the United Nations General Assembly and other international organizations. On the basis of that judgment, which is valid and subsisting, Nigeria is estopped from colluding with the Paul Biya regime to terrorize the people of Southern Cameroon. Under Nigerian jurisprudence is it possible for people to be held without access to a lawyer? Under Section 35 of the Constitution and section 6 of the Administration of Criminal Justice Act the fundamental right of every suspect or detainee to access their lawyer is guaranteed. With respect to the Cameroonians, all efforts made by their lawyers, doctors and family members to visit them in custody were frustrated. Even Mrs. Nalowa Bih who is pregnant was denied medical attention. But due to the intervention of the Minister of Foreign Affairs a representative of the Office of the United Nations Commissioner for Refugees in Nigeria was allowed to visit our clients before they were expelled from Nigeria. During the visit, the United Nations representative found that our clients were held in an underground cell at the headquarters of the Defence Intelligence Agency on the orders of the National Security Adviser.

From your findings, who ordered the arrest? Some people say they were arrested and taken to Cameroon long before Nigerian authorities even got wind of it. When we were refused access to our clients by the National Security Adviser, we filed an application at the Abuja Judicial Division of the Federal High Court on Thursday, January 25, 2018 for the purpose of securing their fundamental rights to personal liberty and freedom of movement.   Barely 24 hours later, in utter disdain for due process,   the National Security Adviser deported our clients from Nigeria to Cameroon. Up till now, the National Security Adviser has not been called to justify his action since the country is run on the basis of official impunity. But as law abiding citizens we have challenged the illegal deportation and we have concluded arrangements to give our clients the best legal defence. We shall pursue the case until Nigeria returns to the community of civilized nations. The Federal Government has to be compelled to abandon its embrace of the rule of might.