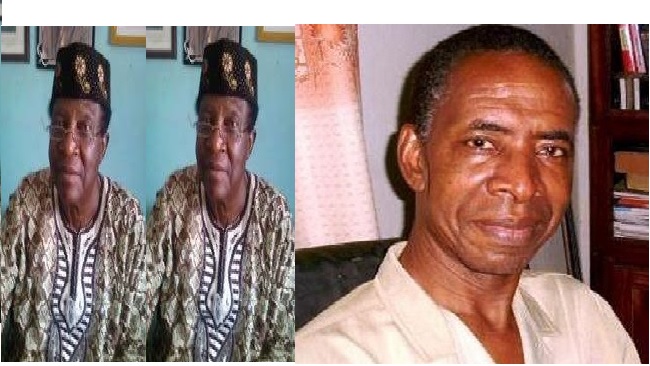 Younger journalists seeing these two veterans on the same platform would take or mistake them for peers. Right and wrong! Ok, they are both veterans, from (an)other generation(s) of Radio Cameroon, now CRTV, the state-run broadcaster. At least, they both belong to a past – a distant past to some – hardly known by most of the generation now manning our media landscape. They are both veterans. But who appears to be some veteran’s peer could actually be their own veteran. Nearly as much as Victor Epie’Ngome is babying many of the younger generation of journalists, Gideon Taka babied Epie’Ngome and co into the profession.

“He recruited me into Radio Cameroon,” says Epie’Ngome as Taka, 81, walks into the room for a meeting of judges for the Courage In Journalism Awards (CIJA). They both chatter over memories of the good old days. They recall the recruitment tests in those days when mastery of the English language (written and oral), general knowledge and voice quality were conditions sine-qua-non for becoming a broadcaster. They reminisce over the rigours of on-the-job training of yore, a far-cry from today, when kids in a hurry are on the air “starring” before they have learned the ropes of the tricky profession or before they have written a correct sentence. Many being one-eyed men in the country of the blind or lame ducks “winning by forfeiture”, they become resource persons in broadcasting even before they have known the difference between uni-, bi- and omni-directional microphones. That is if they ever get to know.

NO COMPROMISE ON VALUES

The gloom that beclouds the countenance of the two vets, suggests they are nostalgic of the good-old-days, regretting the present-day open-door policy or “let-my-people-go” that has opened the floodgates to all-comers and compromised the quality of journalism, especially broadcasting. They seem to be bemoaning a new order that raises a platform for a new breed who are neither groomed nor mentored except, perhaps by godfathers who offer undeserved favours, not professional nurturing. They are glorified in their lapses – not to say their mediocrity – and pampered by another kind of mentors who go soft with their kind of mentees for purposes other than for journalism. Not Taka, not Epie’Ngome!

The two vets talk about how Taka, a pioneer of bilingual Radio Yaounde (later National Station of Radio Cameroon, now the radio arm of CRTV) was on the panel that recruited the young Epie’Ngome alongside among others, MeumaMeombo (RIP), NgyetikoMusi and Willy Chindo in 1976, over a decade after Taka’s own debut there in 1963-64. Taka was among the first crop of former Southern Cameroonians recruited “en mass” to give the hitherto all-French Radio Yaounde a reflection of bilingual Cameroon, those early years after the Reunification of 1961. His batch-mates included Francis Wete, former CRTV deputy GM, who was also his classmate in CPC Bali like Peter Esoka who joined them at the radio years later. Taka often points out they were only classmates, not age-mates. The man who is arguably doyen of the Anglophone press corps says he was much older than his classmates.

Nor have he and Epie’Ngome been a two-some of any kind. But they both became the breed of journalists who found the best of Radio Cameroon practice was in Cameroon Report, now CRTV’s Cameroon Calling (CC). They each anchored the programme and were among a handful of iconic journalists emeritus invited by CRTV last year to showcase its golden age. Answering the call, Epie’Ngome reenacted his personal trademark satirical radio slot The Rambler and Taka stunned listeners with his masterly presentation of the news, two-and-a-half decades since he last did.

An accomplished, medal winning athlete in his school days, Taka retired from CRTV in the mid-1990s after serving as Station Manager in Buea and Provincial Delegate for Information and Culture in Bamenda. His innovation when he anchored Cameroon Report was, he modified it from an initial one-man show as conceived by its founder Boniface Forbin with one long Editorial often on international issues. Taka began Cameroon Report’s drift to its present format with an opening Editorial (now My Take as coined by its present anchor Ebenezer WinnyanwokoMotale), and several contributions.

Epie’Ngome, an agric officer before journalism, took his retirement in the last decade from the Ministry of Communication after serving Radio Cameroon/CRTV in Yaounde, Douala and back in Yaounde, where he became Editor-in-Chief and Cameroon Calling anchor in 1990. In between, he honed his journalism trade asBBC stringer and later BBC producer at its Bush House headquarters in London. In his break from journalism in the early 1980s he did corporate communication for Cameroon Shipping Lines (CamShip). On CC, he was among those detained for producing the “rebellious” pro-multipartyism edition of May 6, 1990.

In his lifelong obsession for fine language and choice words, Epie’Ngome also ran the TV word game show Tel-a-Word. He has used his extraordinary language finesse outside journalism in writing poems and plays, most notably What God Has Put Asunder that depicts the incompatibilities between former French Cameroun and former British Southern Cameroon. He also has an unequalled knack and flare for music and an unusual mastery of information technologies for someone of his generation.

RETIRED BUT NOT TIRED

Can the dictum “retired but not tired” be truer of anyone than of Gideon Taka and Victor Epie’Ngome? Even as you read this, they both are most probably at work, preparing or executing a professional or related duty. A quarter of a century into retirement, Taka could be more busy and multi-tasking than mid-career journalists. He is Manager of Radio Hot Cocoa in Bamenda and, armed with a Master’s degree obtained in Canada in the 1960s, he lectures Journalism at three higher education institutions in Bamenda – Higher Institute for Business and Management Studies (HIBUMS) where he is Head of Department, Cameroon Christian University and the University of Bamenda. He was Journalism HOD at the National Polytechnic earlier. Overly committed to things journalism, he is the oldest active member of the Cameroon Association of English Speaking Journalists (CAMASEJ) North West chapter. He attends meetings and mingles easily with baby journalists in ways that give a feel of unassuming Methusela among Benjamins.

Epie’Ngome has taught Journalism both at ASMAC where he trained in 1977-80 and the University of Buea and continues to train journalists. Only months ago, he and Professor Daniel Anicet Noah, also a former CRTV editor, were invited by CRTV management to go around the country drilling its regional station reporters.

Both Taka and Epie’Ngome are most disposed to volunteer their wealth of knowledge, skills and experiences in ventures that promote the extra-curricular development of younger talents. When feminist journalist CommyMussa launched her Sisterspeak writing competition a couple of years back, Gideon Taka was handy to midwife it.

He and Epie’Ngome have also readily been available in peer review initiatives by MEDIApeople newspaper and CReAM to arbitrate in media conflicts (professional tribunals of honour) like the one that erupted after Father George Nkeze disclaimed his comments about the Kumba Diocese bishop appointment reported in The Sun newspaper and called the newspaper and its reporter names. They are as disposed in judging the performance of journalists for the Courage In Journalism Awards (CIJA). They do so with rare rigour, meticulousness, integrity and dedication though only as volunteers. Not as if this listing is exhaustive.

It may not be said with any certainty that other veterans are not being useful to journalism and usefully mentoring younger colleagues, yet, can one pretend not to notice that these two are a breed apart? Who cannot tell that they are around for calls higher than to recruit unsuspecting younger colleagues for ventures that benefit only the vested interests of Monster-Mentors? You don’t hear their names mentioned in petty gossips that poison the ranks of younger colleagues who ought to be striving for excellence, not doing dirty jobs. They do not act like they own oxygen and can only lend a bit, in measured doses (as a dirty job fee), to younger colleagues. Talk of professional advancement, you see Taka and Epie’Ngome around.

A journalist keeping the company of these two is receiving two layers of rich mentorship – mentorship of mentorship, so to say. They receive from Epie’Ngome fruits of the mentorship he received from Taka. That can’t be nothing, can it? And if such mentees have any personal qualities of their own, tell me what can beat well-groomed inherent qualities? Well, if such younger journalists are in journalism for journalism’s sake, that is.

The author, Franklin Sone Bayen, can be reached at: frankbayen@gmail.com or (237) 677-897-167 / 693-693-881. He is publisher of MEDIApeople newspaper, founder of CReAM, and conceiver and administrative secretary of the Courage In Journalism Awards (CIJA)