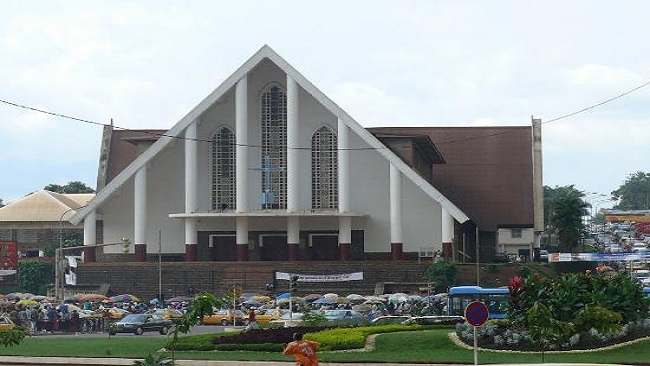 Attack on Yaounde Cathedral Carried Out By Gendarme Officers 0

Cameroon Intelligence Report correspondent in Yaoundé has confirmed that the recent attack on the Notre-Dame-des-Victoires cathedral in Yaoundé on Tuesday, December 17, 2019 was staged by a group of gendarmerie officers with strong ties to the regime.

Cameroon state media houses had earlier reported that the attack was carried out by armed men who held the chief celebrant and some faithful hostage during the less than 15 minutes action in the morning Eucharistic celebration.

Our chief intelligence officer revealed that the pro regime action was masterminded from SED due to the numerous anti government pastoral letters coming from the management of the cathedral.  The ill-disguised gendarmerie officers also searched the chaplain’s office and made away with important documents.

According to our intelligence files, the vehicle used by the so-called robbers which was abandoned not far away from the cathedral gate had been seen transporting some security officers a day before during an operation at the Obili neighborhood.

A lot of tongues have been waging ever since the incident which occurred in a high security area in Yaoundé habouring the Prime Minister’s office, the Central Post Office, Hilton Hotel and the Yaoundé Main Market.  We also gathered that the sum 8 million FCFA was taken by the attackers.

Spectacular robberies with sophisticated weapons have multiplied in recent months in Yaoundé and the economic capital of Douala with the Biya Francophone regime maintaining a kind of deliberate silence.

On November 6, a James Bond-like 007 robbery took place in Bonanjo, the administrative district of Douala during which the robbers shot and killed a man at close range before fleeing with a bag full of banknotes. And, on October 26, 2019, a 70-seat transit bus was the subject of another robbery that involved all the passengers.