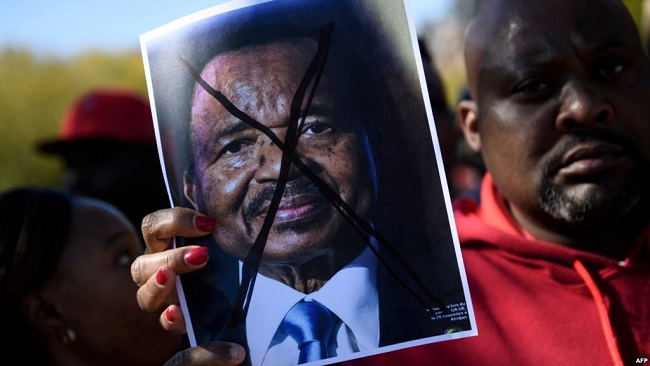 The international community cannot expect the CPDM crime syndicate in Yaounde to pursue and implement democratic principles in a country they have misruled for 35 years. Over the last 35 years, Biya has become very dictatorial and he has successfully deleted any lines that existed between the executive, judiciary and legislative branches of the government. It should be recalled that Mr. Biya appoints all magistrates and judges in the country and has a huge influence on members of parliament and senators, 30% of whom are directly appointed by him, while 70% are elected in a counterfeit election whose results are usually known many months ahead of time. And this same influence could be seen during the just-ended presidential elections.

The AU, EU and the UN should understand now that beating the incumbent through the ballot box in Cameroon is a Herculean task. The electoral code is beautifully written to ensure that the 85 year old Paul Biya is maintained in power. Even the election organizing body, ELECAM, is replete with members of the ruling party and this makes it hard for real impartial elections to be held in a country like Cameroon that lacks basic, transparent and fair election rules.

The ruling CPDM (Cameroon People’s Democratic Movement) party is considered by many Cameroonians are a crime syndicate due to the type of people who are its members. This party’s membership comprises ex-convicts, hardened criminals, murderers, business-people evading taxes and embezzlers. It has been banned in the Southern Cameroons by the Ambazonian Interim Government and designated as a terrorist organization.

The recent presidential elections in Cameroun that was state-managed on October the 7th took place in a repressive political environment and the ruling cabal failed to provide conditions for fair and free voting. Both the Europeans and the current US administration are really awakened by the fact that the butcher in Yaounde cannot be trusted to run a democracy.

No right thinking democrat will be in power for 35 years and seek and gotten a 7th term. Biya cannot be a democrat when more than 4000 Southern Cameroonians have been killed by troops under his command and when hundreds and thousands of both Ambazonians and French Cameroun political elites and activists’ are languishing behind bars.

The so-called presidential elections in French Cameroun following a massive boycott in Southern Cameroons was to recruit new criminals into the CPDM crime syndicate who will only implement what the dictator says and continue to misrule the impoverished nation.