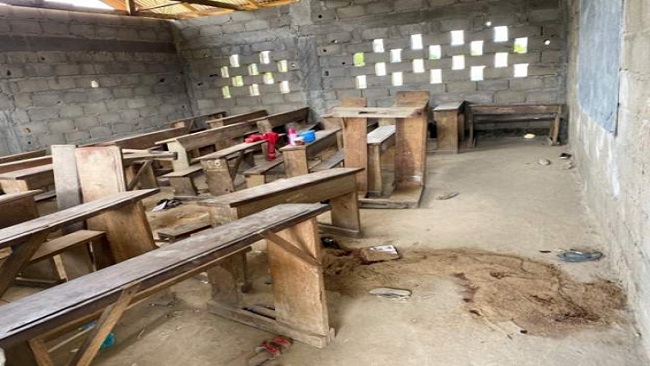 World Council of Churches interim head Rev. Ioan Sauca has joined global Christians and the United Nations in expressing horror at the brutal attack on schoolchildren in Cameron in which assailants slaughtered at least eight students with firearms and machetes.

The children were killed at the Mother Francisca International Academy in Kumba, Cameroon, on Oct. 24.

Unidentified gunmen killed at least eight children in their classroom with guns and machetes, while 12 others were injured.

“The WCC joins with the churches and all people of good will in Cameroon and around the world in condemning this abhorrent act, in commiserating with the families and communities affected, and in praying for the healing of the wounded children,” said Sauca.

Cameroonian church leaders reacted to the recent bloodshed with outrage and demands for action.

Bishop Agapitus Nfon of the Roman Catholic Diocese of Kumba lamented the loss of the young lives in the same statement.

‘BLOOD OF OUR CHILDREN’

“How much of the blood of our children need to be shed before something concrete and immediate is done? How long will the powers that be and are capable of restoring peace and tranquility in the distressed North West and South West Regions sit and wait?”

The attacked was strongly conemned at the UN in Geneva by a spokesperson for the UN High Commissioner for Human Rights, Ravina Shamdasani.

She said that the population continues to pay a heavy price in the ongoing crisis in the North-West and South-West regions of Cameroon and described the attack as “vile”.

“Serious human rights violations and abuses continue to be reported, involving both security and defense forces and armed separatist groups amidst the COVID-19 pandemic,” said Shandasani.

“The killing and maiming of children as well as attacks on educational facilities constitute serious violations of international law and the perpetrators must be held accountable with due regard for international human rights standards.”

She also said that the Cameroonian authorities have an obligation to protect access to education.

No group has claimed responsibility though local authorities have accused separatist fighters of targeting the school, CNN reported.

People have been raising awareness of the incident on social media under the hashtag #EndAnglophoneCrisis.

This was a reference to ongoing movements which advocate a separation between English-speaking Cameroon from the French-speaking part of the country. Separatists in Anglophone regions have been fighting with government forces and government-backed militias for several years.

Both sides faced accusations of violence against civilians, which began in 2016 after residents in the country’s Anglophone provinces, where 20 percent of Cameroon’s population live, protested the government led by French speakers.

The Anglophone conflict has internally displaced more than 670,000 people in affected areas, while 60,000 Cameroonians have fled escalating violence to neighboring Nigeria, according to the United Nations’ estimates in February.

The Moderator of the Presbyterian Church in Cameroon, the Rev. Fonki Samuel Forba, on Oct. 25 prayed for justice for the victims and accountability for those responsible.

“May those behind these gruesome killings of God’s children be imprisoned by the judge of the human conscience even before they are found out, prosecuted and sentenced,” he said.

The WCC appealed for renewed efforts for a comprehensive and more inclusive dialogue to address the current security, humanitarian and human rights challenges in the affected regions.

“The WCC stands in solidarity with and offers its support and accompaniment to the churches of Cameroon as they seek to fulfil their essential ministry for justice, peace and human dignity and rights,” said the council.