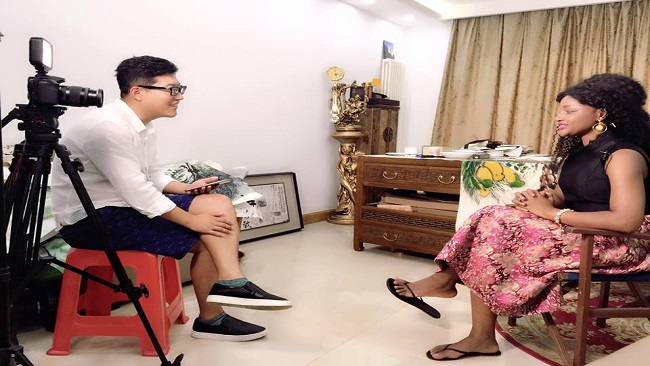 Sandra Made and Zou Qianshun are, in many ways, like millions of newly married couples around the world. Made, 27, is a housewife who looks after their 10-month-old baby, while Zou, 43, is a fishing captain and the family breadwinner. But in China, they have become an online sensation.

The couple began live-streaming funny skits of their home life on Chinese social media platform, Kuaishou, in February. They now have 120,000 followers. Made says their videos are popular because people are not used to seeing an African woman with a Chinese man.

“Everyone loves Sandra and thinks she’s outgoing,” says Zou. The couple makes about 5,000 yuan ($727) a month through virtual gifts donated by fans on the site, which can be exchanged for money, he adds.

They met three years ago when Zou was working in Cameroon, where Made ran a hair salon. A year later, Zou proposed and the couple married in March 2017. Soon after, they relocated to Zou’s hometown near Dandong, Liaoning province, in northeast China.

In 2016, there were just 1,700 mixed marriages in Liaoning, which is home to 43.7 million people, according to China’s National Bureau of Statistics. But Zou says there are five other Chinese men in his town with African wives. “They all met in Africa,” he adds.

Earlier this month, Chinese president Xi Jinping pledged to invest $60 billion in Africa over the next three years at the triennial Forum on China-Africa Cooperation in Beijing. It was symbolic of how China’s ties with the continent have deepened over the past two decades.

About 10,000 Chinese-owned firms operate in Africa today, according to American research firm McKinsey, and a significant number of Africans have moved to China. Their main base is the southern manufacturing city of Guangzhou, where about 20,000 African migrants live, according to Gordon Matthews, a professor of anthropology at the Chinese University of Hong Kong and author of “The World in Guangzhou: Africans and Other Foreigners in South China.”

In Guangzhou, romances between Africans and Chinese people are not uncommon. But they mostly involve a Chinese woman and an African man, according to Matthews. That’s partly because there are more male African traders in Guangzhou than female, he says.

“But Chinese women are also more socially adept, socially skilled and speak better English (than Chinese men),” he adds. “So they are more likely to marry foreigners than Chinese men.”

The most-viewed video on Made’s feed is a comedy sketch of her pretending to feed her baby, Daniel, but instead putting all the food into her mouth.

Reactions on Kuaishou to the couple’s humorous skits include “666,” which means cool, and “Sandra! You’re so beautiful,” “Pretty eyes,” and “You speak good Dandong dialect!” Made says she improves her Putonghua by talking with fans online.

But not everyone’s reaction has been so positive. Initially, Zou’s mother, Zhao Fu Qing, was against their union. “How can a Chinese marry a black woman? She can leave at any time. That’s why at the beginning, both my husband and I said NO to this marriage,” she told Al Jazeera. The couple say Zhao has since become fond of her daughter-in-law.

Chinese racism towards Africans, however, is a sensitive issue. Last year, a skit on China’s biggest Lunar New Year TV show sparked outrage when an Asian actress appeared with blackface and enlarged bottom. Meanwhile, earlier this month a Chinese man was deported from Kenya for posting a video making racist remarks about Kenyans online.

“We haven’t encountered any racist prejudices yet, apart from people’s concerns about cultural differences,” says Qianshun. “But I always tell those people that love has no boundaries.” Matthews says that while racism in China “undoubtedly exists,” extreme cases such as people rubbing Africans’ skin to see if their color will come off are no longer an “everyday thing.”

As the China-Africa economic relationship yields more unions like that of Made and Zou, Matthews hopes the public will gain a better understanding of race. “The more international marriages we have the quicker we can end racism,” he says.