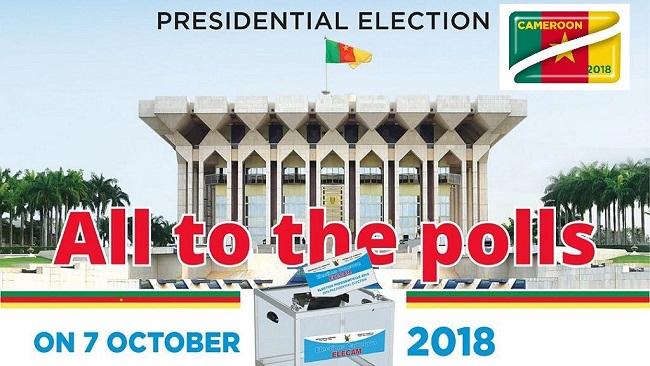 Cameroonians prepare to go to the polls on Sunday, October 7, 2018; as campaigns among the various presidential aspirants intensify throughout the national territory.

Elections were conducted in the past by the Ministry of Territorial Administration, elsewhere the Ministry of Interior until the setting up in December 2006 of an independent body, Elections Cameroon (ELECAM), to take over the organization, management and the supervision of elections.

During the more than two decades of one-party rule, elections were considered a mere formality due to the fact that voters were not offered a choice between different political parties.

However, the situation changed radically with the return to political pluralism. Elections became hotly contested with uncertain outcomes and looming threats of violence as it was alleged that election management procedures favored the ruling party coupled with numerous irregularities.

The President of the Republic is elected for a seven-year term by universal suffrage and by direct, equal and secret ballot.

According to the Cameroon electoral code, the president is elected by a single-round majority ballot and the candidate having obtained the majority of the votes cast shall be declared elected.

It also states that election will not be complete until Cameroon’s Supreme Court rules on requests for annulment and announces the results.

According to ELECAM guidelines, every person of Cameroonian nationality of either sex, who has reached the age of 20 years, is registered and is free from all cases of disqualification provided for by law, is entitled to vote.

Candidates for the office of President of the Republic are expected to be in full possession of their civic and political rights and must be aged 35 years and above by the date of election and will have to show proof of having resided in Cameroon for an uninterrupted period of at least 12 (twelve) months.

The biometric registration of voters is carried out by the country’s election governing body, Elections Cameroon, ELECAM, prior to the elections. Polling is usually organized on a Sunday or a day declared a public holiday and lasts a single day.

Each voter is allowed into the polling station after presenting their voter’s card and proving their identity by producing their national identity card.