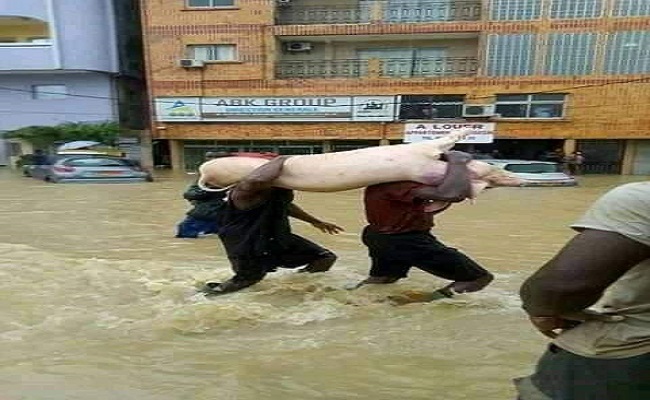 Cameroon has dispatched emergency aid for at least 5,000 people left homeless or displaced by the worst coastal flooding in decades.  Heavy rains this month swept floodwaters through Douala, Cameroon’s largest city and economic capital, leaving much of it underwater.

Fresh fish seller Marcelline Obono, 39, says she lost all of her fish in weekend floods in Cameroon’s economic capital Douala. She says she obtained a loan from a friend to buy fish and sell at the Nkoulouloun market, but that she is not certain of what may happen as more heavy rain threatening to fall.

She says she is very very worried because her children who are back at home may not be safe if there is a heavy downpour. She says God saved her house from collapsing during last weekend’s heavy downpoor that flooded almost all of her neighborhood.

The government of Cameroon reports that more than 5,000 people are either homeless or have left their homes temporarily to seek refuge in safer areas of the town.

Six bridges including the one linking the city of Douala and the Douala International airport collapsed. Thousands of goats, sheep and fouls were dumped by the floods on the Atlantic ocean. No human deaths were reported.

She says Cameroon president Paul Biya asked her to visit Douala and tell residents that he is unhappy with uncivil behaviors that expose civilians to floods. He says Biya is outraged at hapharzard dumping of used plastic papers and bottles that block streams and rivers. She says Biya has ordered a stop to the construction of houses on dry river beds and mountain slopes.

Paul Atanga Nji, Cameroon territorial administration minister, says he was also dispatched by Biya to hand humanitarian assistance to victims of the floods.

He says people should stop constructing houses in forbidden areas.

“We have come here to assist victims of the floods. We have to ask the local population to work hand in hand with the local administrative authorities and with the government,” he said. “When the local administrative authorities tell you that you should not build in swampy areas, you have to follow [obey] them because they are defending your own rights. If you go and invest in swampy areas, you will lose your investments.”

The last time floods of a similar magnitude hit Douala was seven years ago. Environmental researcher Wilfred Mbah Pokam of the university of Yaounde one says the floods could be linked to the changes in climate all of Africa has been witnessing.

“What happens over the Kalahari region which is a dry area over southern Africa, strongly impacts the climate here in central Africa,” he said. “It is a region of the world where the temperature is very high, so it is like a desert. And because of this dry area, the temperature is higher over this area and a bit low over central Africa and because of the longitude when these winds are very strong, we have less rainfall over central Africa and when they are a bit low, we have more rainfall.”

Pokam said floods in Douala, the most densely populated city in Cameroon, can be associated  with changing rainfall patterns, resulting from climate change. He says pressure on urban land and resources is sharply increasing meaning that many more people are likely to suffer when floods occur. He also says poor urban planning is not helping the situation.

Cameroon says the new master urbanization plan will take into consideration improving drainage systems and stopping the illegal occupation of riverbeds and wetlands.