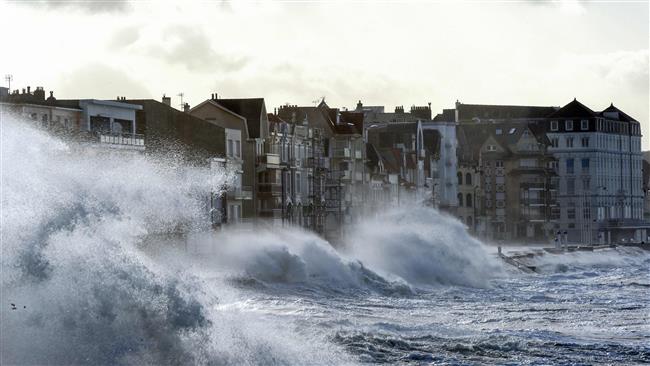 Winter storm Eleanor swept into France, Belgium and the Netherlands on Wednesday after tearing through England and Northern Ireland, cutting power to tens of thousands of people and forcing airports and train services to halt operations.

A skier was killed by a falling tree at Morillon in the French Alps while 15 others have been injured by the storm across the country, four of them seriously, civil defense spokesman Michael Bernier told AFP.

Another person was hurt by a falling tree in the southern Dutch village of Heesch.

Heavy winds led the airports in Strasbourg and Basel-Mulhouse on France’s border with Germany and Switzerland to close before they were reopened shortly after midday.

At Paris’s Charles de Gaulle airport, 60 percent of departures were delayed Wednesday morning, as were a third of arrivals, while a handful of flights had to be rerouted before the winds eased back a bit.

The winds were also wreaking havoc with train services in several French regions.

About 200,000 homes across northern France were without electricity, while “particularly intense” flooding was expected on the Atlantic coasts.

The Eiffel Tower, which attracts six million visitors a year, was closed until at least Wednesday afternoon, while worries about falling tree branches prompted Paris officials to close all city parks for the day.

Eleanor barreled into continental Europe after whipping across England, Northern Ireland and Ireland, with the Thames Barrier, one of the largest movable flood barriers in the world, closed as a precautionary measure to protect London from swelling tides.

Gusts of 160 kilometers per hour (100 mph) were recorded at Great Dun Fell in Westmorland, northwest England, while overturned vehicles and trees caused closures of major motorways.

In Ireland, power supply company ESB said electricity had been restored to 123,000 customers, while 27,000 remained without power.

Belgium and parts of Spain were also put on “orange” alert, the third of four warning levels, with officials urging people to exercise caution when venturing out.

Although the winds eased toward midday, rescue workers in Brussels were kept busy with about 70 calls across the city, mainly after trees were knocked down, and several parks were closed.

In the Netherlands, 252 of about 1,200 flights were cancelled at Amsterdam’s Schiphol airport, a key European hub, as weather alerts were issued for several regions.

Flights were also disrupted at Frankfurt’s airport in Germany, where the storm has been baptized Burglind, and at Zurich airport, as Swiss officials urged hikers to avoid forest walks.

RTS television reported that about 14,000 homes were without power in several Swiss cantons.

Eleanor is the fourth major storm to hit Europe since December.

The storm is now heading for the French Mediterranean island of Corsica, where meteorologists are warning of violent gusts that could reach 200 kilometers per hour.

Austria is also in its path, where the avalanche risk was expected to be raised to four on a scale of five in several areas Wednesday afternoon.