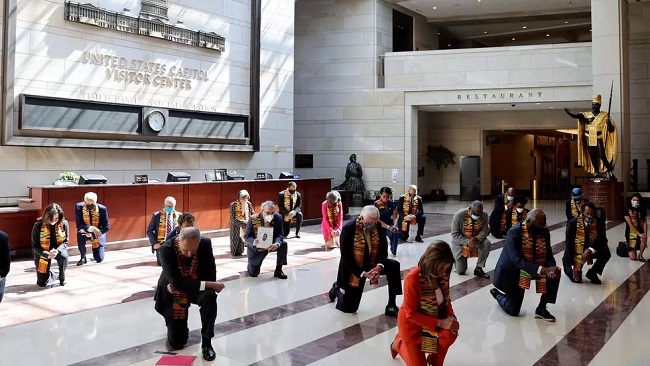 A sweeping overhaul of police oversight and procedures is being proposed Monday by congressional Democrats in response to the deaths of black Americans at the hands of law enforcement.

House and Senate Democrats held moment of silence at the Capitol’s Emancipation Hall, reading the names of George Floyd and others killed. They then knelt for 8 minutes and 46 seconds — now a symbol of police brutality and violence — the length of time prosecutors say Floyd was pinned under a white police officer’s knee before he died.

“We’re here to respect the actions of the American people to speak out against that,” she said, before kneeling on one knee. “We are here to honor George Floyd.”

According to a draft outline obtained by The Associated Press, the Justice in Policing Act to be unveiled Monday would limit legal protections for police, create a national database of excessive-force incidents and ban police choke holds, among other changes. It outlines the most ambitious changes to law enforcement sought by Congress in years.

Rep. Karen Bass, D-Calif., chairwoman of the Congressional Black Caucus, which is leading the effort, said called it “transformative.”

A profession where you have the power to kill should be a profession that requires highly trained officers who are accountable to the public.

Bass said the package from House and Senate Democrats will be bolder than any law enforcement changes of the past decade. “It is time for police culture in many departments to change,” she said. “And we believe that the legislation will make a major step forward in that direction.”

The package confronts several aspects of law enforcement accountability and practices that have come under criticism, especially as more and more police violence is captured on cell phone video and shared widely across the nation, and the world.

The draft document said the proposed legislation would revise the federal criminal police misconduct statute to make it easier to prosecute officers who are involved in misconduct “knowingly or with reckless disregard.”