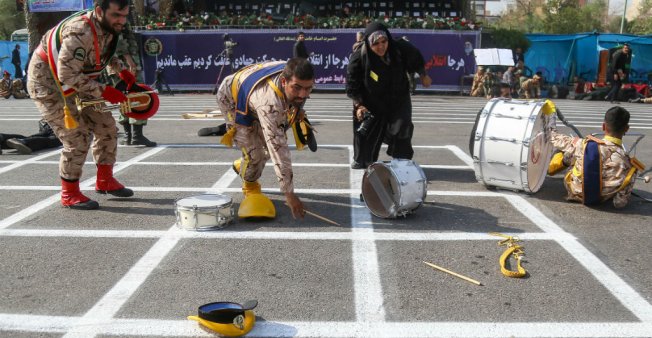 Iran launched a missile attack into eastern Syria targeting militants it blamed for a recent attack on a military parade in the Iranian city of Ahvaz, the country’s Revolutionary Guards revealed Monday.

“The headquarters of those responsible for the terrorist crime in Ahvaz was attacked a few minutes ago east of the Euphrates by several ballistic missiles fired by the aerospace branch of the Guardians of the Revolution,” said a statement posted on the official website of the Revolutionary Guards.

State television and the state-run IRNA news agency said the attacks “killed and wounded” militants in Syria, without elaborating. Syrian state media did not immediately acknowledge the strike.

State TV aired footage of one of its reporters standing by as one of the missiles launched, identifying the area as being in Iran’s western province of Kermanshah. A state TV-aired graphic suggested the missiles flew over central Iraq near the city of Tikrit before landing near the city of Abu Kamal, in the far southeast of Syria.

Abu Kamal is held by forces loyal to Syria’s embattled President Bashar Assad. However, the city has been targeted even now by militants from the extremist Islamic State (IS) group, who have lost almost all the territory they once held in Syria and Iraq.

Confusion over who carried out Ahvaz attack

The attack adds to confusion over who carried out an assault on a military parade in Ahvaz on September 22 that killed at least 24 people and wounded over 60.

In a blizzard of furious statements from top Iranian officials following the attack, Iranian President Hassan Rouhani, accused Iran’s adversaries the United States and some Gulf Arab states of provoking the bloodshed and threatened a tough response.

However the IS group also claimed responsibility for the assault, but initially made factually incorrect claims about it. An IS group video later released by the group’s Amaq agency showed footage of several men that Iran ultimately identified as attackers, though the men in the footage never pledged allegiance to the extremist group.

In announcing the retaliatory attack into eastern Syria, Iranian state media said the missiles targeted both “takfiri” militants – a term it often applies to the IS group – and Ahvazi separatists. The separatists have not been known to work with the IS group in the past.

Last year, Iran fired ballistic missiles into Syria over a bloody IS attack on Tehran targeting parliament and the shrine of Ayatollah Ruhollah Khomeini.

In September, Iran fired missiles into Iraq targeting a base of an Iranian Kurdish separatist group. The separatists say that strike killed at least 11 people and wounded 50.