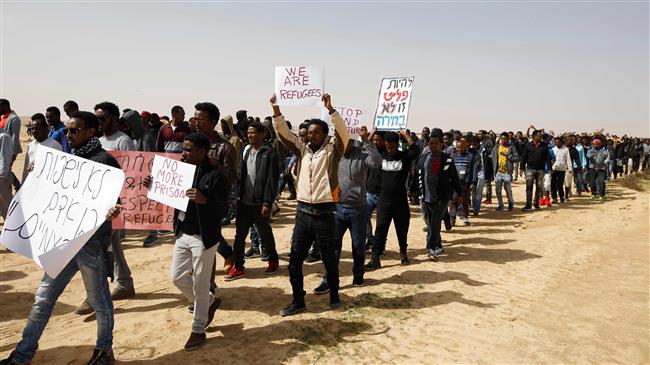 Israeli Prime Minister Benjamin Netanyahu suspends a deal with the United Nations that would prevent the regime from deporting thousands of African migrants only hours after he announced the agreement.

Netanyahu had said on Monday that Israel and the UN High Commissioner for Refugees (UNHCR) had reached an agreement “for the departure of at least 16,250 migrants…to Western nations.”

The rest of the migrants would be resettled across Israel under the deal, which Netanyahu described as “the best possible.”

The UNHCR also confirmed the agreement in a statement, saying, “A joint working group will be set up with a series of objectives and a timetable to implement solutions for some 39,000 people over five years.”

However, under pressure from far-right politicians, Netanyahu took to Facebook later in the day and said he was putting the deal’s implementation on hold until further notice.

“For the time being, I am suspending the agreement,” Netanyahu said, noting that he would meet with Interior Minister Aryeh Deri and residents of south Tel Aviv before reconsidering it, The Times of Israel reported.

Prior to the deal with the UN, Israel had handed notices to nearly 39,000 asylum seekers, mainly Eritreans and Sudanese, notifying them that they would be deported to Uganda and Rwanda.

The migrants say the Israeli regime has already forced them in their thousands to southern Tel Aviv, intentionally making living conditions unbearable to put pressure on them.

The migrants have been staging regular thousands-strong rallies to condemn the prospect of deportation.

The latest protest took place on March 25 gathering around 25,000.

The participants carried signs and chanted slogans such as “There is no difference between our blood and their blood because we are all human beings.”