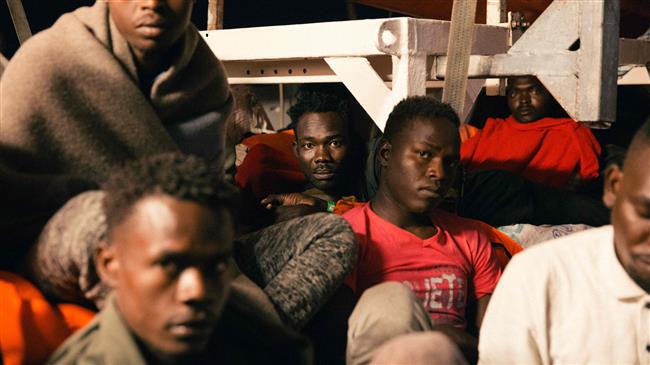 The Italian government has once again closed the country’s sea ports to a rescue boat carrying 60 refugees stranded at sea off Libya, igniting yet another dispute with Malta over who should allow the boat to dock.

The refugees, including five women, a nine-year-old child, and three teenagers, were saved by Open Arms, a boat run by Spanish aid group Proactiva Open Arms, on Saturday.

The rescue ships being run by humanitarian aid groups have drawn the ire of Italy’s anti-refugee Interior Minister Matteo Salvini, who has vowed to deny such refugee boats docking in his country.

On Saturday, Salvini said Open Arms “can forget about arriving in an Italian port” and claimed it should go to Malta, the nearest port of call.

Malta immediately hit back on Twitter, with its interior minister contending that the tiny Italian island of Lampedusa, south of Sicily, was closer to the boat.

“Quit spreading incorrect news, dragging Malta into it for no reason,” Interior Minister Michael Farrugia tweeted, attaching to his post a map that he said indicated the rescue occurred in waters between Libya and the Italian island.

Reports said the refugees on board included Palestinians, Syrians, and Guineans, adding that they were all in good condition.

It remained unclear where the Spanish rescue vessel would be allowed to anchor.

Open Arms is the third such humanitarian rescue ship that has been subjected to Salvini’s crackdown over the past weeks.

Earlier this month, Italy and Malta refrained from accepting the French NGO rescue ship Aquarius carrying more than 600 refugees, sparking an international outcry before Spain stepped in to help.

Malta then allowed another vessel, operated by German charity Mission Lifeline, to dock with 233 refugees on board after Italy rejected it.

Last year, Italian authorities reached an agreement with the internationally-recognized government as well as some militia groups in Libya — the main embarkation point for refugees seeking to reach Europe — to curb the flow of refugees to the continent.

Salvini has threatened to seize rescue ships or bar them from Italian ports altogether as he tries to keep his word on campaign promises to stop the influx of refugees.

Additionally, Salvini has called for processing centers to be set up south of Libya’s borders as a way to block attempts by refugees to cross the Mediterranean.

Over the past five years, more than 600,000 refugees have reached Italy by risking their lives on board rickety boats in the sea. Some 500,000 of them are still staying in the country.

According to the United Nations (UN) figures, at least 500 people have died this year while trying to cross the central Mediterranean. Some 2,853 also lost their lives last year.