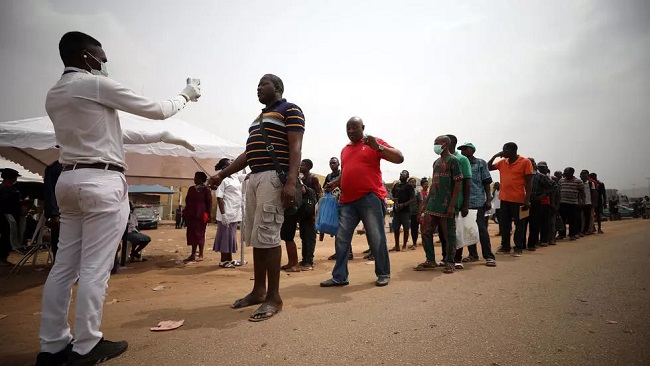 Africa’s largest city Lagos was deserted Tuesday after Nigeria locked down its economic hub and shuttered its capital, in the continent’s latest effort to brake the juggernaut of coronavirus.

Businesses were closed, markets abandoned and streets empty as the usually chaotic megacity of 20 million, along with the capital Abuja, shuddered to a halt on the first full day of a two-week shutdown.

“I don’t know how people can survive for two weeks without working to make money.”

Nigeria embarked late Monday on one of Africa’s most ambitious efforts at social distancing after recording 135 confirmed cases and two deaths.

Enforcing the stay-at-home order in the overcrowded slums of Lagos will be a mammoth challenge as millions of poor depend on their daily earnings to survive.

Officials insist the draconian measures are needed urgently to ward off an explosion in infections that could easily overwhelm the weak health system in Africa’s most populous nation.

“To reduce the number of people with coronavirus, we know they need to stop movement,” 60-year-old engineer Ogun Nubi Victor told AFP.

“But there in no money for the citizens, people are just sitting at home, with nothing to eat.”

In an attempt to ease the pain, Lagos state authorities have pledged to supply basic food rations to some 200,000 of the city’s neediest households.

Across all of Africa, countries have recorded more than 5,300 cases and 170 deaths, according to a tally compiled by AFP.

Tanzania on Tuesday became the latest nation to record its first fatality from the novel coronavirus.

The numbers have lagged behind those of other continents, and as of Monday, there were still six countries out of 54 in Africa — South Sudan, Burundi, Sao Tome and Principe, Malawi, Lesotho and the Comoros — that had yet to detect a single case.

But experts have repeatedly warned of Africa’s vulnerability, describing its many conflicts, poor sanitation, packed urban slums and under-equipped hospitals as sources of potential catastrophe.

Dozens of countries across the continent have imposed restrictions from night-time curfews to total shutdowns to try to halt the disease.

Uganda on Tuesday was also waking up to lockdown after President Yoweri Museveni ordered his east African nation to shut up shop immediately.

The Republic of Congo was gearing up to follow suit later in the day and Botswana’s president ordered a state of emergency from midnight on Thursday.

But growing reports of brutality from security forces in some nations have highlighted the challenges of enforcing the draconian measures.

The police watchdog in South Africa, on lockdown since last week, said Monday it was investigating an officer for allegedly killing a man who defied the regulations.

The country’s defence minister also condemned “any type of abuse” by security forces after videos on social media showed civilians forced to squat or roll on the ground.

The regional powerhouse, which has the highest numbers of confirmed infections on the continent, will start mass door-to-door screening and testing for infections, President Cyril Ramaphosa said Monday.

The “unprecedented” exercise will be launched in the next few days, with at least 10,000 field workers deployed across the country of 57 million people, he said in an address to the nation.

“We are now entering a new phase in the fight against the coronavirus pandemic,” Ramaphosa said.