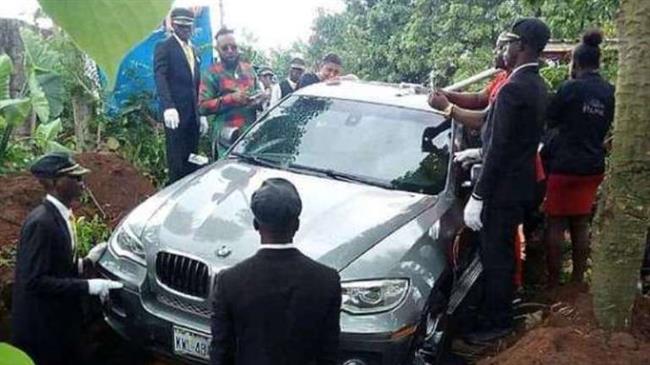 A wealthy man in Nigeria has reportedly buried his deceased father in a brand-new luxurious BMW to fulfill a promise he once made to buy him a car.

Pictures have gone viral on social media showing a group of men burying the deceased person inside of an 88,000-dollar BMW X5 in a deep grave in the remote poor village of Ihiala.

The man, who was identified only as Azubuike, had reportedly promised his father to buy him a car but lost his father before he could do so. He then decided to use the car as his coffin, according to locals.

The move, however, has struck locals as well as social media users with shock and anger, with some people describing it as a waste of money in the severely impoverished country.

“This is the sort of thing that keeps us poor as black people,” said a village resident, while another local described the move as an act of “insanity and selfishness.”

Social media news website Elite Readers even speculated that the images may have been staged. It argued that the “lack of information” around the ceremony suggested that it might have been a hoax.

A similar burial made headlines back in 2015, when a billionaire buried his mother in a brand new Hummer in the Nigerian state of Enugu.

Nigeria, the seventh-most populated country in the world — with a population of approximately 200 million — was declared the world’s poverty capital last year.