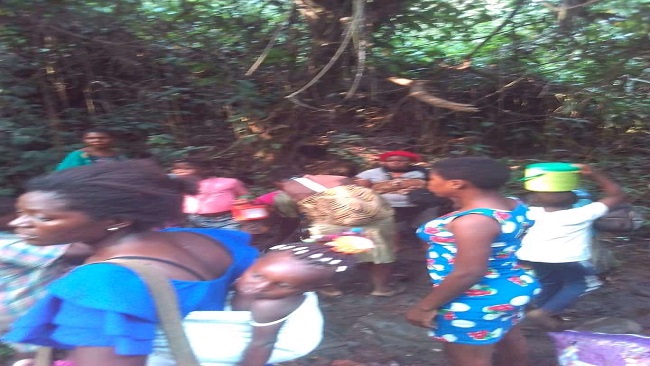 The conflict between the Cameroonian Government and Ambazonia Separatists has led to influx of many asylum seekers into Nigeria’s border towns in Sardauna and Kurmi Local Government Areas in Taraba. Confirming the development during a visit to the area on Thursday, Taraba Governor, Mr Darius Ishaku, said that the state government would assist the refugees with shelter and relief materials.

Darius appealed to the host communities to accommodate the refuge seekers as same gesture was extended to Taraba residents when Cameroon took them after being displaced by the Mambilla crisis in June, 2017. Investigations by News Agency of Nigeria (NAN) revealed that the worst-hit communities are in Nwah Sub-Division of Nkembe Division in Cameroon, where the Ambazonian fighters allegedly attacked Fulani communities, killing many people and rustling their cattle.

A senior Nigeria Immigration Service official in Gembu, who pleaded anonymity, told NAN that the displaced Cameroonians were still moving into Nigeria for safety through border villages of Lip, Mbankim and Chabbal-Kareje. He said that no fewer than 500 refugees were inside Gembu town while more than 1,500 others were scattered across other border villages, including Sakaka, Warkaka, Ndumyaji and Inkiri. The official said that no fewer than 1,000 Cameroonians were also taking refuge with relatives in Tep, Leme, Nguroje, Yerimaru, Mbar, Dorofi and Barup villages.

The source said the UN High Commission for Refugees (UNHCR) had in March, 2018, received no fewer 556 refugees in the area, some of whom were given letters of attestation. The official urged the UNHCR and the National Commission for Refugees, Migrants and Displaced Persons (NCFRMI) to intervene urgently by screening and issuing the fresh “refugees’’ appropriate means of identification. “This will help in monitoring their activities and check any criminal tendencies among them,’’ the source added.

Also in an interview, a Cameroonian Human Rights defender, Prof. Sarli Saadu-Nana, told NAN that the Ambazonian separatists were targeting Fulani communities because of their wealth which the fighters believed could finance their war. “Secondly, they are perceived as supporting the government, and as such, are legitimate targets for reprisals when soldiers burn their villages or kill the fighters. “They are easy targets as they are isolated, while the fighters have their camps in grazing areas. When the fighters are attacked by security agencies, they believe herders betrayed them. “Similarly, some farmers are settling old scores of farmer-grazer disputes,’’ he said. He called on the Federal Government and other well-meaning individuals and organisations to come to the aid of the refugees.

A visit to the area revealed that the refugees were living under difficult conditions, without enough food, shelter and medicines. An elderly woman, Dudu Maimuna, who narrated her ordeal in Tep village, told NAN that they escaped from Tim community in Cameroon without a single property. “We have lost everything and we have no food, no water, no shelter; we therefore, need urgent help because as you can see, our children are hungry and sick,’’ she said in Fulfulde dialect.

Malam Abdu Yerima from Jam village in Tim said he narrowly escaped death as his family was trapped in a hut while the fighters set the house ablaze. “Two of my brothers were shot and killed when they attempted to escape, but by the grace of God I found myself here. “We are currently living under harsh conditions without basic needs such as food, clothes and shelter,’’ Yerima said. Alhaji Saidu Bawa, Leader of Fulani community in Sardauna Local Government Area, said they were aware of the condition of the displaced persons, adding that the community had been mobilising aid for them even before government’s intervention.