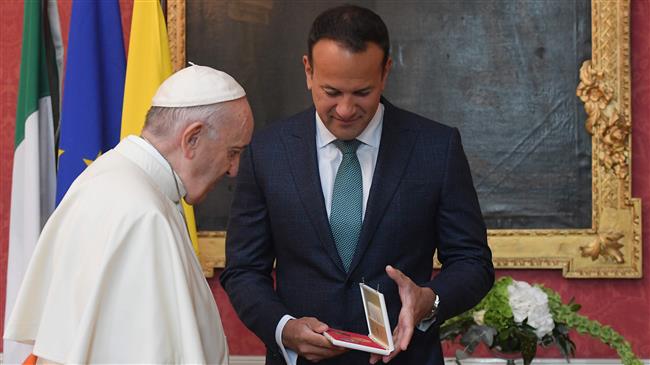 Prime Minister Leo Varadkar has used the first papal visit to Ireland in 39 years to demand action by the Roman Catholic Church to address the systemic cover-up of child abuse by persists and church institutions.

An Alitalia flight carrying Pope Francis, his entourage and the Vatican media corps touched down at Dublin airport on Saturday morning for a brief visit to Ireland, a country that has been devastated by clerical abuse.

“Magdalene Laundries, Mother and Baby Homes, industrial schools, illegal adoptions and clerical child abuse are stains on our state, our society and also the Catholic Church. Wounds are still open and there is much to be done to bring about justice and truth and healing for victims and survivors,” Varadkar told a state reception attended by the Pope.

“Holy Father, I ask that you use your office and influence to ensure this is done here in Ireland and across the world … We must now ensure that from words flow actions.”

The Catholic Church faces its worst credibility crisis in years. Scandals in Ireland, Australia, Chile and the United States have put pressure on the Pope to more fully address the issue of child sex abuse.

‘Repugnant’ abuses a source of shame for church

Addressing the reception attended by some abuse survivors, Pope Francis acknowledged that the failure of Church authorities to address “repugnant” clerical abuses was a source of shame for the Catholic community.

“I cannot fail to acknowledge the grave scandal caused in Ireland by the abuse of young people by members of the Church charged with responsibility for their protection and education,” he said.

“The failure of ecclesiastical authorities – bishops, religious superiors, priests and others – adequately to address these repugnant crimes has rightly given rise to outrage and remains a source of pain and shame for the Catholic community.”

The number of people turning out for the Papal visit is expected to be about a quarter of the 2.7 million who greeted John Paul II in 1979, indicating how the country has changed since abuse cases came to light in the 1990s.

In 1979, contraception, homosexuality, divorce and abortion were illegal in Ireland, and more than nine in 10 people attended mass each week.

Those pillars of Catholic teaching have been overturned, with voters approving abortion and gay marriage in referendums over the past three years. Mass attendance is also now well below 10 percent in some Dublin parishes.

The papal visit coincides with the 2018 World Meeting of Families (WMOF) — a global Catholic gathering that takes place every three years.

Pope Francis is also set to attend an outdoor mass in Dublin’s Phoenix Park on Sunday.