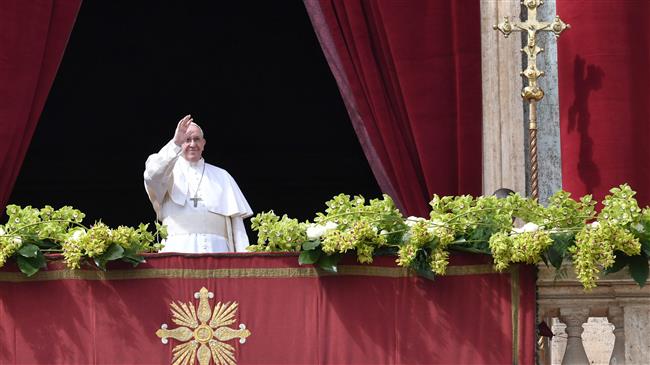 Pope Francis, in his traditional Easter message, has lamented the killing of well over a dozen “defenseless” Palestinian protesters by Israeli troopers’ live fire near the Israeli-Gaza border, pleading for peace in the Holy Land.

The Pontiff, 81, on Sunday made the comments and appeal in his “Urbi et Orbi” (to the City and the World) message from the central balcony of St. Peter’s Basilica in Rome to tens of thousands of people in the flower-bedecked square below where he earlier celebrated a Mass.

In an apparent reference to the massacre in the besieged Gaza Strip on Friday, when Israeli soldiers and snipers shot dead 17 Palestinian demonstrators, the head of the world’s 1.2 billion Catholics also called for “a reconciliation for the Holy Land”, which “also experiencing in these days the wounds of ongoing conflict that do not spare the defenseless”.

During Friday’s bloody protest, around 30,000 Gazans marched on the fence with the occupied territories at the start of a six-week protest, dubbed “The Great March of Return,” demanding the right to return to their homeland.

The rallies coincided with the 42nd anniversary of Land Day, which commemorates the murder of six Palestinians by Israeli forces in 1976.

The demonstrations turned violent after Israeli forces used tear gas and live fire to force back demonstrators who had approached within a few hundred meters of the heavily-fortified fence, further wounding more than 1,400 other Palestinians.

Multiple Muslim nations around the world voiced their outrage over the Israeli military’s response to the mass demonstration in Gaza.

Palestinian President Mahmoud Abbas has declared Saturday a national day of mourning and urged a general strike in honor of the victims. He also said that Israel was “fully responsible” for the tragic killings of peaceful Palestinian protesters. The strike, which affected universities, schools, government organizations, was called for in the occupied West Bank in solidarity with Gaza.

While the Muslim nations were outraged by the carnage, the deadliest in the Israeli-Palestinian conflict since the 2014 Gaza War, Israeli Prime Minister Benjamin Netanyahu praised the troops via his official Twitter account late on Saturday for their actions which he claimed were aimed at guarding Israel.

On Friday, the UN Security Council held an emergency meeting over the situation in Gaza, but the US blocked a draft statement which urged restraint and called for an “independent and transparent investigation” into Friday’s violence.

UN Secretary General Antonio Guterres also called for “an independent and transparent investigation” into the incident.