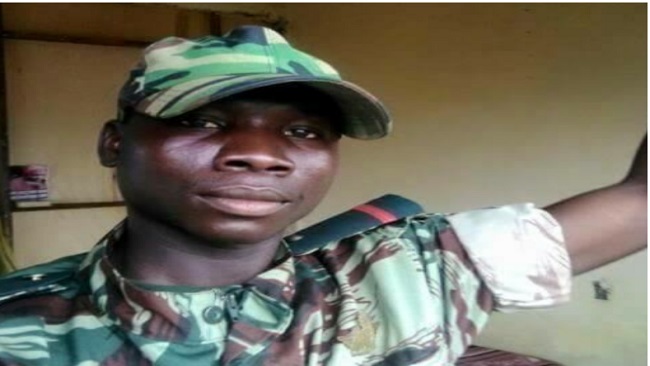 Soldier loyal to Biya regime gun down in Kumba 0

Cameroonian secessionists on Wednesday shot dead a soldier in Kumba, a city in the Southwest region also known as K town.

25-year old Sardi Juvinal, a former student of Maroua high school in Cameroon’s far north, was murdered at his security post by heavily armed secessionists who have been demanding independence from the West African country for more than a year.

Why it matters: The soldier was murdered following the expiration of a 48-hour ultimatum by secessionists to Cameroonian authorities. Last weekend, the armed activists released a video showing a government official they had kidnapped pleading for his life.

Animnom Aron, a delegate for social matters in the Northwest region, who was abducted weeks ago, was heard saying he would be killed should the government fail to show that the secessionists’ leaders, arrested in Nigeria on January 5, and extradited to Cameroon on January 28, were still alive.

But the ultimatum came and went without any reaction from the government of President Paul Biya, an 80-something leader who has been in power for 36 years and plans to run for another term this year.

The activists say they want the Southwest and Northwest regions, where English is spoken compared to French elsewhere in Cameroon, to be independent. They have argued that they have been marginalized even though oil and other natural resources are located in their regions.

But millions of other Cameroonians who live in squalor and hopelessness have expressed shock and dismay at the insinuations that their lives were better off.

President Biya has not visited the region since the insurgency began in 2014. The lack of leadership had prompted other Cameroonians to argue that they all suffer from the same neglect and brutality from a government too old, too deaf and too blind to feel, hear or see the suffering of its people.

In the state of Maryland in the United States where the secession is being planned and funded, the activists believe they are closer to victory than never before.