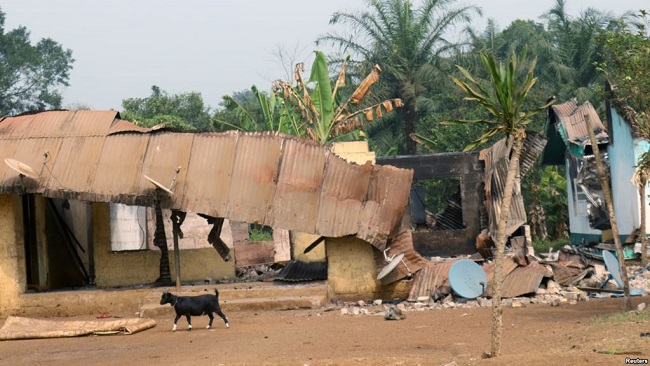 Separatist violence in the English-speaking regions of Cameroon along the border with Nigeria have completely stalled trade between the two countries. Buses no longer ply the Bamenda-Enugu road corridor as attacks and kidnappings continue.

About 70 men and women have assembled at Kandem, a village in southwestern Cameroon on the border with Nigeria to discuss what to do with their farm produce and how to get supplies from neighboring Nigeria. Five months ago, Kandem was a bustling market town along the $423-million African Development Bank-funded road linking Bamenda, Cameroon, with Enugu, Nigeria.

Pierre Atemengue, who came from central Cameroon, opened a plantation in Kandem. He says constant conflict between Cameroon government troops and armed separatists fighting for the independence of the English speaking from the French speaking regions of Cameroon have paralyzed business. He says 90 percent of the local farm produce has not been sold for the past five months.

He says he has asked all men to store cocoa in their community warehouse, while the women make sure that perishable farm produce like plantains, fresh maize and vegetables are harvested only when buyers come to their villages. He says women have been asked to work in groups to be able to meet supply deadlines whenever demand will be high.

Atemengue says goods imported from Nigeria are now difficult to come by, and when found are very expensive.

VOA mounted a commercial motorcycle to visit abandoned businesses in the village.

Rider Lionnel Mbung says the fighting has scared off the busloads of Nigerians that used to flood the village to buy farm produce and supply basic commodities, and that 80 percent of the youths in the village have fled the conflict.

Lionnel says he braved the crisis and stayed, but is now out of business after the government of Cameroon banned motorcycles because armed separatists were using the bikes to attack the military and kidnap government workers.

“Since the situation in Cameroon started, the bike business has dropped down, there is no way for us, things are not moving. They have passed orders that they do not want to see bikes, so we hide our bikes here, then we go to look for passengers because when we go there with our bikes, the police will catch [arrest] us.”

Access to most villages along the border with Nigeria is by motorcycle. The ban on their use has also helped to paralyze business.

Paul Atanga Nji, Cameroon minister of territorial administration who ordered the ban says the government will only reconsider its decision when peace returns and when an identification of the riders he has asked for is complete.

“The population has complained time and again because most of them kidnap, kill, destroy. So we are asking them to put order in this profession,” said Atanga Niji.

Cameroon, with a population of about 23 million, depends on Nigeria for most basic commodities, and Nigeria’s 160 million people count on Cameroon for rice, maize, tubers, plantain, cocoa and other farm produce.

The unrest in Cameroon began in November, when English-speaking teachers and lawyers in the Northwest and Southwest regions, frustrated with having to work in French, took to the streets calling for reforms and greater autonomy.

Over the past year, armed separatist groups have emerged demanding all-out independence for the two English-speaking regions. The government says at least 30 soldiers and police have been killed in recent clashes.