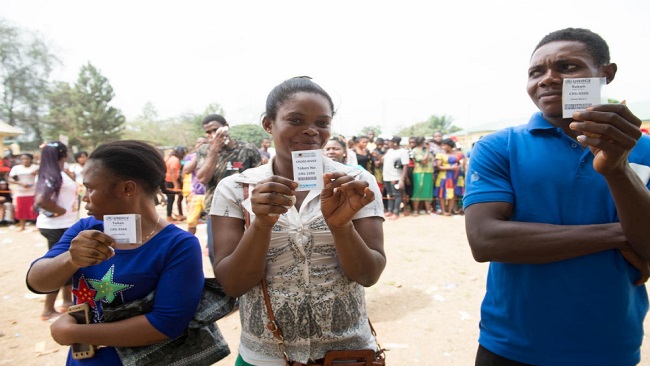 UNHCR appreciates the contribution of EUR300,000 by the European Commission’s department for overseas humanitarian aid (ECHO) towards the response to the Cameroon refugee situation in Nigeria.

NCFRMI and UNHCR completed registration in Sardauna LGA, Taraba state on 20 April bringing the total figures of Cameroonian refugees in Nigeria to 21,291. In Boki LGA, Cross River, seven new villages are reportedly hosting an unverified number of new refugees. UNHCR and NCFRMI are planning registration missions to the said villages.

On 24 April, UNHCR chaired the monthly technical coordination meeting in Calabar on Cameroonian refugees to assess the multi-sectoral response to the refugee influx in Nigeria’s southeastern states. As key outcomes of the meeting, the Ministry of Health (MOH) committed to taking measures to ensure that refugees receive free primary healthcare services in Cross River state. Also, the Cross River state Primary Health Care Development Agency indicated that it is recruiting additional healthcare workers to meet increasing demand as a result of the refugee influx across the state.

The UNHCR Office organised a two-day training for partners from 26 to 27 April in Ikom LGA. Some 25 UNHCR partner staff including, BENGONET, FJDP, HIFAS, Rhema-Care, Caritas and Mediatrix, took part in the training, which focused on strengthening their knowledge on humanitarian principles, protection monitoring, prevention of sexual exploitation and abuse, among others. Meanwhile, a registration training was organised from 25 to 27 April for 10 NCFRMI staff. These trainings aim to enable an effective response to the Cameroon refugee situation.

During the reporting period in Cross River state, UNHCR partner, HIFAS, provided health care assistance to 17 refugees referred to three health centres in Ikom and Etung LGAs. The Ikom LGA has provided power supply for the borehole water pumping system at the transit shelter in Ikom as a temporary measure to assist some 300 refugees.

The absence of specialized healthcare services at referral health centres in Oban and Akamkpa LGAs will lead to referrals of special health cases to tertiary health centres in Calabar LGA. This will result in higher transportation costs and require an increase in health response envelope.

Negotiations for a refugee relocation site in Sankwala, Obanliku LGA were concluded during the reporting period. UNHCR partner, Rhema-Care, requested that local authorities seal the deal with a formal letter indicating the donation of the land site.

Some 171 unregistered refugees were identified during protection monitoring in Cross River. It was also noted that refugees in Cross River are undertaking secondary movements within the state in search of assistance and better living conditions. Meanwhile, new arrivals were reported in Boki, Ikom, Etung, and Akamkpa LGAs.

Despite response to the refugee influx in Cross River, gaps in assistance remain significant. The refugee shelter in Amana and Ikom are overcrowded and needs identified include lamps, mattresses, blankets and kitchen sets.

In Benue, Kwande LGA, UNHCR and partners undertook a multifunctional team mission to Abande and Anyake villages, Kwande LGA, on 2 May to continue refugee sensitization on relocation and mobilize host community support for relocation. The team included partners namely, MSF, FJDP, BENGONET and SEMA. Two bridges in the host community on the relocation route need urgent repairs. Host community requested renovation of the school where refugees are hosted and a borehole, among others, as a demonstration of appreciation for hosting the refugees.

The relocation of the refugees in Abande is tentatively set to start on 15 May, meanwhile, the digging of five wells has begun at the location, where three of the wells will serve the host community and two will serve the refugees.