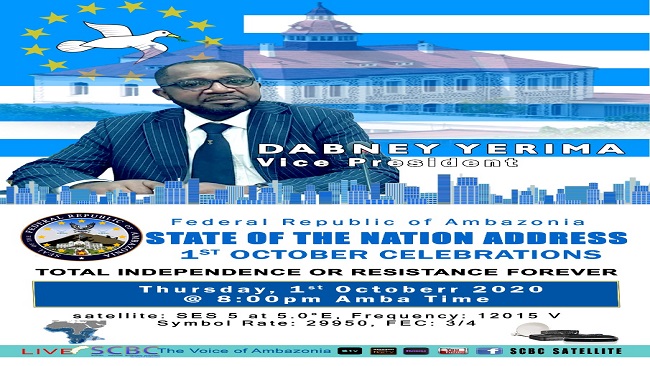 Cameroon’s English-speaking minority has not only challenged the brutal regime in Yaoundé by taking up arms to fight a so-called “professional” military without support from any other country, it has also been celebrating its independence without a country.

Across the globe, citizens of a country celebrate their independence when a country exists, but Southern Cameroonians are not waiting for the French Cameroon army of occupation to pack and leave before they celebrate.  They are doing it in flesh and in spirit across the globe.

Despite the repression unleashed by the French-supported Yaoundé government, Southern Cameroonians are determined to obtain their independence. The cohabitation with their Francophone counterparts has not been a beautiful marriage and for four years, they have been seeking a divorce that is hard to obtain.

The country’s English-speaking minority complained of marginalization four years ago, and instead of paying heed to the anger and frustration, the crime syndicate that rules Cameroon unleashed unprecedented violence on innocent people, forcing many to pick up arms to defend themselves.

The government thought the fighting would end after a few days, but to its dismay, Southern Cameroonian fighters who had only hunting rifles have put up a good show.

They have kidnapped army soldiers, killed and beheaded thousands of them and humiliated Cameroon’s “professional” army by winning many battles.

This has infuriated the so-called government in Yaounde and since the crime syndicate does not negotiate, it has continued to count on its tricks and military violence, hoping that it will one day put an end to the conflict that has become more complicated with the passage of time.

Though the country’s economy has collapsed and millions have been displaced, the corrupt Yaounde regime is still depending on its old ways to sustain the status quo.

The government does not seem to have learned any lessons. It is stuck in its old ways and this is understandable.

Those ruling the country clearly belong to the past and due to their ages; they are being referred to by the population as “living ancestors”.

The only language these living ancestors understand is violence. The word negotiation does not exist in their vocabulary.

But there are many things they have to know before they quit this world. Cameroon will never be the same again due to their mismanagement of the country.

The government’s institutional and systemic marginalization of the English-speaking minority has created a nasty situation that will linger long after their death.

Southern Cameroonians no longer feel at home in a union in which they are considered as second-class citizens.

They want to walk away from this abusive relationship and the majority of Southern Cameroonians holds that only a total and unconditional divorce will give them the happiness they deserve.

While the government still prioritizes brutality, it does not know that its military violence is gradually granting Southern Cameroons its independence.

The killings and burning of homes will not serve a purpose. The people have made up their minds and they are being propped by a rich and vast Diaspora which is willing and ready to give the Yaounde government a running for its cash.

The fighting in the country’s two English-speaking regions has been going on for four years and some five thousand Southern Cameroonians have been killed by the Yaounde military and their thugs. But this is not deterring the fighters on the ground. The boys are determined and they are hellbent on delivering the goods.

The Diaspora is making good on its promise. It had promised to create a nightmare for the government and for four years, it has been as good as its word.

The arms and money have been flowing into Southern Cameroons and many army soldiers have beaten the dust.

Bombs have been going off and this ugly situation has kept those in Yaoundé up all night, with many government officials regretting why they had not prioritized genuine dialogue right from the beginning.

Key elements of the government like the country’s territorial administration minister, Paul Atanga Nji and the defense minister, Beti Assomo, have all aged prematurely. Southern Cameroonians have succeeded to run down their health and the erectile dysfunction that is stalking them has transformed them into bitter ministers.

Southern Cameroonians have not sent them to their graves, but theirs is the kingdom of insomnia and many of they will only be having sex with their eyes. The Southern Cameroonian crisis that is playing out in the country’s two English-speaking regions has finally made its way into the homes of the country’s ministers, with sources close to some of these officials saying that there is tension in many homes.

Despite the killings and pressure from the Yaoundé government, Southern Cameroonians are not bowing anytime soon. They have developed a Spartan mentality and they are not yielding despite the loss of life.

While they mourn the death of their fellow Southern Cameroonians, they do so with the understanding that their memories will be kept alive and that they will be those heroes who will be celebrated once the army of occupation packs and leave their territory. Happy Independence Day!