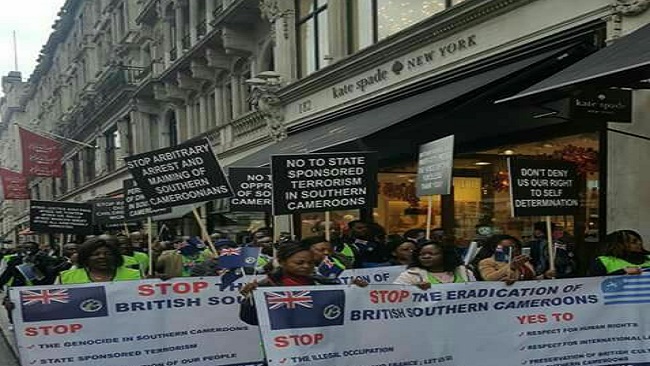 Hundreds of Southern Cameroons protesters from all over Europe and the UK are heading to London for a massive demonstration on Friday against a possible President Biya presence in the Commonwealth heads of government meeting and to show solidarity with the Ambazonian freedom fighters back home. In a global outpouring of anti-Biya sentiment, London and the East Midlands including Belgium and France are expected to record the biggest turnout.

In UK, at least a thousand people will join London city’s biggest Southern Cameroons demonstration ever, Metropolitan Police have said. Organizers are anticipating a sellout crowd with banners exposing the genocide currently going on in Southern Cameroons.

Anti-French Cameroun demonstrators are also expected to pack the streets north of the United Nations headquarters in New York as the situation in Southern Cameroons continues to deteriorate.  Echoing the words of Martin Luther King III, the Communications Secretary of the Interim Government of the Federal Republic of Ambazonia, Chris Anu told Cameroon Concord News that “Just because you have the biggest guns does not mean you must use it on innocent Southern Cameroonians.”

Hon. Chris Anu also noted that the time has come for the world to listen to Southern Cameroonians – and Southern Cameroonians are saying, `We want to stay as the Federal Republic of Ambazonia.’ Ambazonians have strongly endorsed the policy of their Interim Government and the widely acclaimed statements of Hon Chris Anu, that the preservation of the sanctity of human life must be a sacred commitment of all. In the light of this demonstrable policy which accords with the principles of international law and practices of civilized nations, Cameroon Concord News deems it necessary to once more highlight the history of international criminality on which French Cameroun was founded.

In another cowardly act, a very desperate French Cameroun regime faked the abduction of foreign citizens who were controlled, protected and given safe passage by well-disciplined Ambazonia forces hoping to use the blackmail to obtain an adverse European Union resolution against the Federal Republic of Ambazonia and its revolutionary war of liberation. This criminal government network of kidnappers for ransom in French Cameroun and the immediate ethnic inner cycle of the Buhari government in Nigeria masked in the fight against Boko Haram superintended by this network are well documented. The Interim Government of the Federal Republic of Ambazonia has expressly outlawed the abduction of foreign nationals and has consistently condemned the abduction of its President and members of its Interim Government by the criminal network in Nigeria and French Cameroun.  The plethora defining and distinctive irreconcilables between French Cameroun and the Federal Republic of Ambazonia, make life together in any form impossible.

By Chi Prudence Asong and Soter Agbaw-Ebai in London