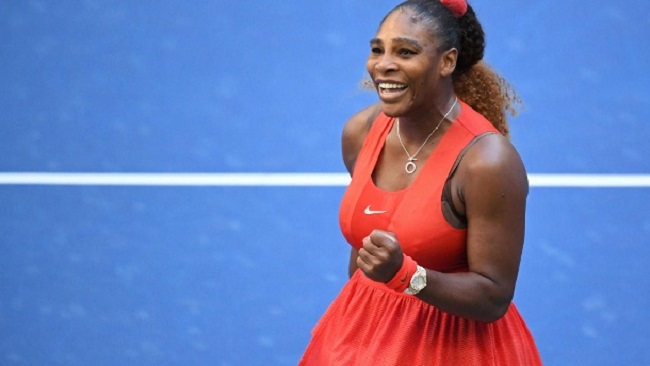 Tennis: Williams rallies to move into last 16 of US Open 0

Serena Williams overcame an early scare to defeat fellow American Sloane Stephens and move into the last 16 of the US Open on Saturday.

Williams, the third seed, lost the first set convincingly before rallying to dominate the next two, triumphing 2-6, 6-2, 6-2 inside a near empty Arthur Ashe Stadium.

“It was intense, I have to say. We always have some really incredible matches and it brings out the best of my fitness when I play Sloane,” said Williams.

Stephens, the 26th seed and 2017 US Open champion dumped Williams out of the 2013 Australian Open during her sensational run to the semi-finals as a 19-year-old.

And after dropping the opening set, Williams feared that she was about to fall victim to a major upset again.

“In that first set I don’t think she made any errors, honestly. She was just playing so clean and I just said, ‘I don’t want to lose in straight sets.’

“Next thing I know, I won the second set and I was like, ‘Okay, great,'” Williams added.

The 38-year-old, gunning for a record-equalling 24th Grand Slam singles title, will play Greece’s 15th seed Maria Sakkari for a place in the quarter-finals.

Sakkari stunned Williams in three sets at the Western & Southern Open, a US Open tuneup, in New York last week.

With spectators barred from this year’s Flushing Meadows event due to the coronavirus pandemic, several top players took advantage of suites they have been assigned to watch two of their rivals in action.

Sofia Kenin and Naomi Osaka — the second and fourth seeds respectively — took in the three-setter, as did fifth seed in the men’s draw, German Alexander Zverev, who could be seen munching on sushi.

The opportunity to watch some tennis is a rare perk this Grand Slam for competitors who would normally be swamped by fans if they appeared in the stands.

“Usually it’s impossible to watch a match in a kind of peace,” explained Williams. So it’s cool us players can watch each other. It’s interesting, I like it.”

Also among the few onlookers was Williams’ three-year-old daughter who was filmed clapping approvingly at one point.

“I hope she say her mama fighting,” said Williams, before adding, “I don’t think she was paying attention. She may have been playing with some princesses upstairs.”

It has been more than three years since Williams won her 23rd Grand Slam title at the 2017 Australian Open — when she was already pregnant with Olympia.

Williams has come close since, reaching four major finals only to come away empty handed.