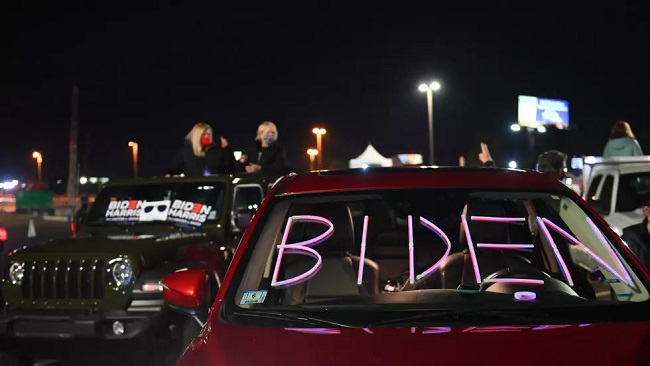 US: Democrats gather in Biden’s home town ahead of speech 0

Supporters of White House hopeful Joe Biden began gathering nervously late Tuesday for an election night event like no other.

Shortly after 10:00 PM (0200 GMT Wednesday), a trickle of cars started to arrive for a socially distanced drive-in in the parking lot of the Chase Center in the Democrat’s hometown.

Some 200 to 300 cars are expected for the event, where Biden and running mate Kamala Harris — joined by their spouses Jill Biden and Doug Emhoff — will address supporters from an outdoor stage.

With early projected results inconclusive, arrivals in the parking lot were slow. When people did arrive, they stood around anxiously watching results come in on giant screens.

Among the first to get there was 37-year-old Rossana Arteaga-Lorenza, who came with her young son. She had Biden-Harris stickers on her car and US flags hanging out of the window.

“I’m excited to be here,” she told AFP, through the window of the driver’s seat.

“If Joe Biden becomes president, I will be extremely happy. We are hopeful for a better future for our country.”

Drive-in rallies were a feature of the 77-year-old Biden’s campaign due to the coronavirus pandemic. Red, white and blue traffic cones with “Biden-Harris” emblazoned on them kept the vehicles six feet apart.

Biden supporter Thomas Hansen, 32, said he was cautiously optimistic about the night ahead.

“I’m hesitant to get excited about it, but I think it’s going well, especially by the number of people who voted early,” he told AFP.

Hansen said he was tired of the drama surrounding Trump’s presidency and wanted some “normalcy.”

“I think it should be boring most of the time in the White House,” he added. “If it isn’t, then you’re kind of doing something wrong.”

With early results suggesting a close race, it promised to be a long night. Hansen’s sister, Virginia Hansen, said she feared it could be days before a winner is confirmed.

“I’m withholding any hope for now,” said the 30-year-old.

Biden had started the day by visiting St. Joseph on the Brandywine, a Catholic church in his affluent Wilmington neighborhood.

He stopped at the cemetery where his first wife and daughter — and his son Beau — are buried.

Biden then visited his childhood home in the industrial town of Scranton in Pennsylvania, signing his name on the living room wall for good luck.

He stopped in Philadelphia before heading home to Wilmington, where he will watch the results before his event.