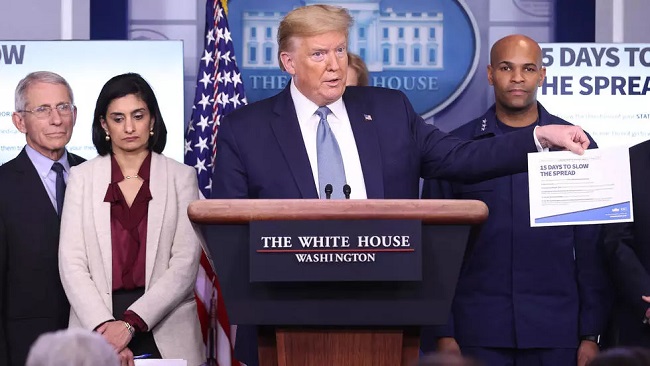 US: Trump admits coronavirus ‘not under control’, says crisis may last all summer 0

The White House on Monday urged all older Americans to stay home and everyone to avoid crowds and eating out at restaurants as part of sweeping new guidelines meant to combat an expected surge of coronavirus cases.

President Donald Trump and the Coronavirus Task Force released the guidelines as the US government moved to try to blunt the impact of the virus, racing to bolster testing and aid even as financial markets fell and Americans scrambled to reorder their lives.

The new recommendations included: over the next 15 days, Americans should not gather in groups of more than 10 people, schooling should be at home and discretionary travel and social visits should be avoided. If anyone in a household tests positive for the virus, everyone who lives there should stay home.

“If everybody in America does what we ask for over the next 15 days, we will see a dramatic difference,” Deborah Birx, White House coronavirus response coordinator, said at the White House briefing.

‘Crisis could pass by July or August’

When asked when the pandemic would subside, Trump said that “if we do a really good job” the crisis could pass by July or August, a far less optimistic take than in his earlier predictions that it could be over within weeks.

“We will rally together as one nation and we will defeat the virus,” the US president added. “We can turn the corner and turn it quickly.”

Trump also, for the first time, acknowledged that the virus, which has battered the global markets, may send the nation’s economy into a recession, a potentially brutal blow for an incumbent in an election year.

He also, without providing details, said of the administration, “We’re going to back the airlines 100 percent,” a note of reassurance for an industry crippled by travel bans and fears of spreading the virus.

Trump, who adopted his most somber tone yet when discussing the crisis, acknowledged that it was “not under control” in the United States or globally, but said he did not yet plan to call for domestic travel restrictions.

The administration did not immediately define what an an older American was in terms of the recommendation to stay home.

Trump may ask military for help

On Monday Trump also said he might ask the military to help build temporary hospitals to tackle the worsening coronavirus outbreak.

Trump also said he felt that postponements of primary elections, like those announced in Ohio, Georgia, Louisiana and Kentucky, were generally unnecessary.

Ohio Governor Mike DeWine said on Twitter his administration was ordering polls closed on Tuesday in defiance of a state court ruling to the contrary.

The number of known coronavirus infections and deaths in the United States has paled in comparison with hot spots of the global pandemic, such as China, Italy or Iran.

But the tally of confirmed U.S. cases has multiplied quickly over the past few weeks, surpassing 4,600 and prompting fears American hospitals might soon be overwhelmed, as Italian medical centers have been strained to the breaking point.

At least 83 people in the United States had died of the virus, as of Monday, according to Johns Hopkins University and public health agencies, with the hardest-hit state, Washington, accounting for the bulk of the fatalities, including six more announced on Monday.

The unprecedented wave of closures and restrictions, which began to accelerate last week, took on fresh urgency as New Jersey “strongly discouraged” all non-essential and non-emergency travel between 8 p.m. and 5 a.m., starting on Monday.

The states of New Jersey, New York and Connecticut struck a regional agreement to close all movie theaters, casinos and gyms as of 8 p.m. Monday (0000 GMT). Restaurants and bars in the three states – where more than 22 million people live – will serve takeout and delivery only.

Officials in six San Francisco Bay Area counties on Monday ordered residents to stay at home for all but the most crucial outings until April 7. That directive came a day after California Governor Gavin Newsom urged adults older than 65, and their caretakers, to remain indoors whether or not they have underlying health conditions.

“This is a national problem. It cannot be done in a piecemeal method,” Cuomo said, calling for bold action involving the military and Army Corps of Engineers to quickly create excess hospital capacity.

In the nation’s capital, Washington, a deeply divided Senate was considering a multibillion-dollar emergency spending bill requiring sick leave for some workers and expanded unemployment compensation, while the Supreme Court postponed oral arguments for the first time in over a century.