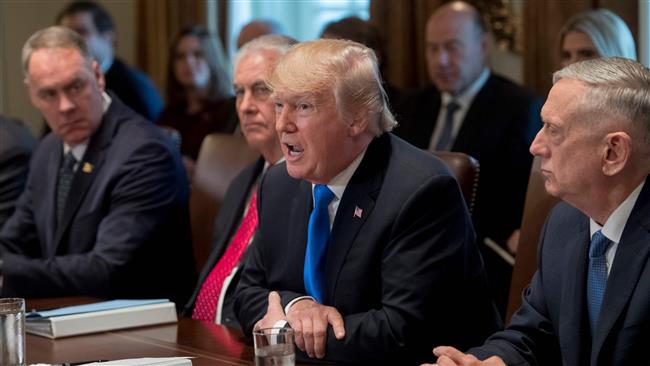 The author of a very critical book about Donald Trump’s first year in office has said that “one hundred percent” of those around the US president consider him “moron, idiot.”

Michael Wolff, whose book “Fire and Fury: Inside the Trump White House” went on sale on Friday, said in an interview he spent three hours with Trump during the presidential campaign and in the White House.

The author contradicted Trump’s assertion that he had never talked to the writer for the book and had authorized “Zero access” to the White House.

Wolff told NBC News on Friday that for the book he conducted interviews with those in close contact with Trump and his entire circle questioned his fitness for office. The book depicts a president who was ill-prepared to win the office in 2016, and Trump aides who ridiculed his abilities.

“They all say he is like a child. And what they mean by that is he has a need for immediate gratification. It’s all about him,” he said.

“Let me put a marker in the sand here. One hundred percent of the people around him” question Trump’s fitness for office, Wolff added.

“They say he’s a moron, idiot. Actually, there’s a competition to sort of get to the bottom line here of who this man is. Let’s remember, this man does not read. Does not listen. So he’s like a pinball. Just shooting off the sides,” the writer noted.

In a tweet on Thursday evening, Trump, however, dismissed Wolff’s book as a pack of lies.

“I authorized Zero access to White House (actually turned him down many times) for author of phony book! I never spoke to him for book,” he tweeted.

“Full of lies, misrepresentations and sources that don’t exist. Look at this guy’s past and watch what happens to him and Sloppy Steve!” Trump added.

Trump’s lawyer is trying to stop the publication of the book, but Wolff has defended himself against attacks on his credibility.

“My credibility is being questioned by a man who has less credibility than, perhaps, anyone who has ever walked on earth at this point,” Wolff said.

Wolff claimed that he interviewed Trump for some three hours during the presidential campaign and after he was sworn in as the president in January last year.

“So my window into Donald Trump is pretty significant, but even more to the point… I spoke to people who spoke to the president on a daily, sometimes minute-by-minute basis,” Wolff said, adding he had notes and recordings of the interviews.

“I am certainly absolutely in every way comfortable with everything I’ve reported in this book,” he stated.

NBC News reported in October that Secretary of State Rex Tillerson referred to Trump as a “moron” after a meeting in July at the Pentagon with members of his national security team and Cabinet members.

A few days after the report, Trump harshly criticized Tillerson in an interview with Forbes magazine, suggesting that he’s smarter than the top US diplomat.