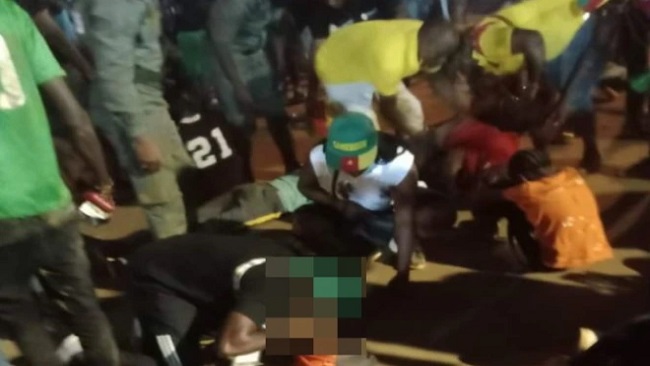 Kids have been banned from attending Africa Cup of Nations matches following the stampede which killed a six-year-old girl.

The crush prior to Cameroon’s win over Comoros resulted in eight deaths and 38 injured.

And now, in response to the tragedy, the Cameroonian government have ordered 250 extra police officers for their quarter-final clash against the Gambia on Saturday.

Along with the increased security, children under the age of 11 will not be permitted into Africa Cup of Nations games for the rest of the tournament.

One match has also been taken away from the Olembe Stadium – where the stampede occurred.

And CAF president Patrice Motsepe insists the venue will not host the semis or final unless Cameroon soccer officials can guarantee it will be safe.

The announcements came as Cameroon Sports Minister Narcisse Mouelle Kombi confirmed the results of a government investigation were not yet available.

However, Kombi did reveal what they believe to be the cause of the stampede.

He said: “I will not be able to give you the results of investigations ordered by Cameroon President Paul Biya but the massive and late influx of supporters and spectators at Yaounde’s Olembe stadium caused the crush.”

Nearly 60,000 supporters attempted to enter the stadium, despite the attendance being capped at 48,000 due to Covid restrictions.

One of the reasons behind the late crush was that fans were watching coverage of another match prior to entering the stadium.

But the authorities are yet to address why security at the game directed fans towards a locked gate or why they were overwhelmed by the mass of people.

Kombi did go on to explain why extra police are being rolled out for the quarter-final at the weekend.

He said it is ‘to stop the uncivil behaviour of Cameroonians who want to force themselves into the stadium when they do not have entry tickets and negative COVID-19 test results’.

In order to attend matches at this year’s Africa Cup of Nations, supporters must present negative Covid tests and proof they are vaccinated.

Another issue involving fans took place earlier in the tournament when 40 supporters invaded the pitch during a match between Algeria and Ivory Coast.

Cameroon were originally set to host the tournament in 2019 before it was stripped from them due to issues with stadium preparations.