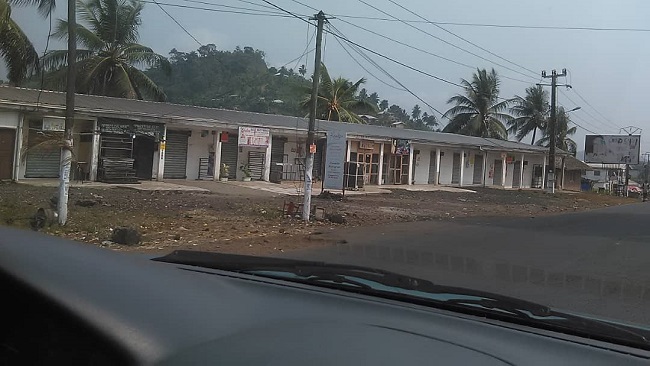 The Southern Cameroons Interim Government in exile on Sunday hailed the huge success in the lockdown against French Cameroun teleguided elections in the territory.

Addressing a cream of Southern Cameroonian elites in Holland, Vice President Dabney Yerima declared “Glory and immortality for our Ambazonian martyr and jailed leaders” after reading aloud a report about the complete boycott of the so-called twin poll in Southern Cameroons.

Cameroon government sources speaking on condition of anonymity indicated that Biya may soon be forced to change his Anglophone policy or pushed out of power in Yaoundé.

Vice President Dabney Yerima also spoke of a new plan to map a new Ambazonia Interim Government strategy backed by key Southern Cameroons think tanks in Europe, South Africa and the United States. A move that will definitely signal an escalation in self defense operations against the Francophone dominated Cameroon government army.

Comrade Yerima revealed that prior to the French Cameroun elections, pro Yaoundé militias operating in Southern Cameroons and elements of the Rapid Intervention Battalion (BIR) stepped up attacks against innocent Southern Cameroons civilians with troops loyal to the Biya regime firing French-designed rockets from Mbouda in East Cameroun into the Mezam County.

Sunday’s session of the “Ambazonia Interim Government Briefing” was devoted mainly to the elections in Ground Zero.   Vice President Dabney Yerima noted that the success of the boycott will begin a new process to tackle the crucial task of restoring unity to the many Southern Cameroons factions.

Yerima furthered that the Ambazonia leader, President Sisiku Ayuk Tabe long agreed to a political and organizational reforms to cement the unity drive among all Southern Cameroons groups.

The Yaounde-organized elections flopped. Here are the statistics from a loyal ELECAM official:

1. 98% of Rural Ambazonia DID NOT Participate

2. 90% of Urban Ambazonia DID NOT Participate.

Now, out of the 1.55%, a majority was soldiers and French Cameroun civilians paid and ferried across the Mungo

• Buea is a graveyard. The silence is deafening. The churches and so called polling stations were empty. No elections whatsoever.

• Kumba is a Ghost town. Only SDO out voting. Early morning gunshots from self-defence forces.

• Mamfe Extremely Quiet. Only Mayor and SDO with foreign occupiers out.

• Victoria is deadly silent. No movement.

1. Gunshots in Kumba, Buea, Alakuka, Mbengwi, Rendez Vous, Kumbo,etc The case of Mbengwi saw a police officer shot but rushed to the hospital.

2. Mile 7 & 8 Mankon started as early as 3 am as well as Buea 2 am : Prisoners are transported in Buea to go and vote to deceive the world :

3: Bafut had the post office visited by the consortium of fire 🔥 simply because voting materials were hidden inside the building

4: Muyuka is not left out as joint forces in collaboration with most barracks and their Generals fires gunshots to chase those ferried from French Cameroun to cast votes:

5: In Mbah – Kumbo Commander Capo of Bui and his boys transported, mounted then fired explosives that echoed all over Kumbo :

6: Victoria started in a good footing with almost everywhere shutdown this morning: We are told some CPDM enablers are in a conclave planning to open at least 4 polling stations with some few at the barracks but the feedback so far is positive

7: Most polling stations have been hit and boxes destroyed by Bui warriors causing the regime to dispatch at least 4 armored cars that are now hiding their election officers in neighborhoods  around Nji