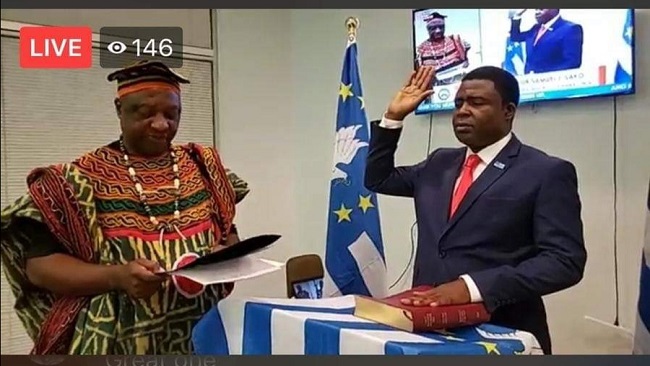 Ambazonia: The filth of corruption has infiltrated Sako, Chris Anu and Kometa 0

The Ambazonia leader President Sisiku Ayuk Tabe was right to appoint a vice president in the person of Comrade Dabney Yerima to take over the leadership of the Southern Cameroons Interim Government. Cameroon Concord News Group had made an honest observation about how the Ambazonia Interim Government had to contend with nasty characters within its ranks immediately after the Berlin forum.

Frankly speaking, no profound and popular governing body in all history has function without its share of filth, adventurers and rogues including boastful and noisy elements such as Samuel Ikome Sako, Chris Anu and Mr Kometa passing for front line leaders of the Southern Cameroons struggle and quest for independence.

Many senior Southern Cameroons political elites both in Ground Zero and in the diaspora have suggested that given the inevitability of corrosive elements in the likes of Sako, Anu and Kometa claiming to own the Ambazonia Interim Government, there was an urgent need for the leadership of Vice President Dabney Yerima to simply ignore the failed and disgraced leaders and work towards ensuring that the noble values and norms of the founding fathers remained the defining features of the Interim Government.

We of the Concord Group agree and are moving a step further to say continuous revolutionary and political education of Southern Cameroonians is the solution.

Ambazonians following the resistance are now too anxious both in Ground Zero and in the diaspora. Sadly, not because we are actually heading to Buea but awaiting outcomes were Biya and French Cameroun would triumph with their Special Status. In the United States and the Scandinavia countries, it is whether or not one of the chief rogues namely Sako, Anu, Kometa or Ayaba would emerge victorious.

Not much has been done by these so-called front liners to show that they are serious in rooting the French Cameroun military and its civil administrators out of Southern Cameroons territory. Watching some of these former Interim Government comedians recently on social media, it was evident that these adventurers, rogues, boastful elements are presently making a mockery of the Southern Cameroons struggle. These fraudsters haven’t just claimed a share of the Ambazonia Interim Government. They are increasingly pushing the international community away from the suffering people of Southern Cameroons.

It will not be too long from now that the Southern Cameroons diaspora will abandon the struggle as these corrupt individuals continue to promote themselves as being in the heart of the governing Interim Government structure.

In fact, not only did the Interim Government under Sako and Chris Anu attracted nasty elements; it was also breeding and transforming them into heartless individuals who enjoyed looting from the poor donations while concocting fake armed resistance photos and coining slogans allegedly to address the problems faced by our people in Ground Zero.

Today in the US, even Southern Cameroonians who escaped from Cameroon under life threatening conditions, lost a number of their family members in the struggle for freedom and emerged with terrible scars, have somehow metamorphosed into corrupt tax-in-transit kingpins. They have dealt a heavy blow to the Dabney Yerima administration, rendering it woefully incapable of mounting a response to the numerous French Cameroun government attacks on the people of Southern Cameroons.

The situation is very disturbing and like one of our desk editors recently observed Cameroon Concord News Group was  either too optimistic or naïve in thinking that education is the solution to the Southern Cameroons leadership problem. How would you teach cash strapped fake men of God like Sako and Chris Anu to respect public donations? The solution really is rallying behind the jailed leader President Sisiku Ayuk Tabe and by extrapolation, Vice President Dabney Yerima who are putting in place a credible Amba Bonds Project system via the Bank of Ambazonia that flushes out from the Interim Government’s body politic the malignant cancer of corruption.

Southern Cameroons is not short of elites. We have a very vibrant diaspora with the power of the purse. We have competent men and women with military experience in the UK and the United States. But we are expecting Sisiku Ayuk Tabe and Dabney Yerima to do it for us while pretending to be responding to distractions coming from Sako and his comedians.

While our Ambazonia politics has served to disable the revolution, the corrupt have been able to create an ecosystem of interdependence with other equally filthy elements selling a controversial and non productive Swiss Peace Initiative.

At a time when you expect Southern Cameroonians to use their strength in the West to achieve complete and total independence from French Cameroun, they are busy thinking that moving away from rogues could cause a domino whose ultimate direction is unknown.

How else can we explain the failure to shame people who have evidently stolen Ambazonian money? Ikome Sako, the disgraced former Acting President and his associates are still walking free, enjoying their loot despite countless revelations of corruption that should be in every Southern Cameroonian home both in Ground Zero and in the diaspora.

Our failure or delay in naming and shaming Sako, Anu and Kometa for obvious crimes is a threat to our Southern Cameroons struggle and quest for an independent state.  It will continue to make it impossible in the future for Southern Cameroonians to donate to the resistance.