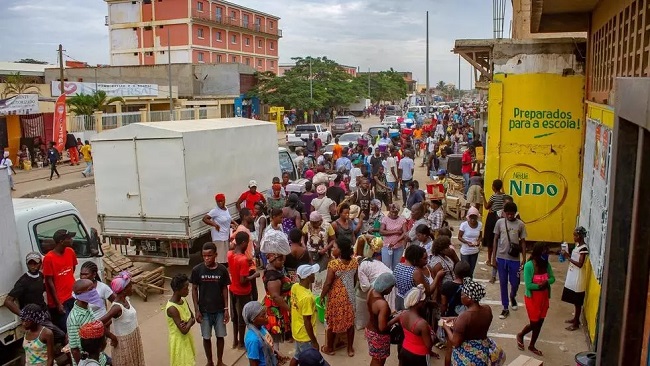 It is a cry from the heart and the stomach that is reverberating across African towns and cities reeling under lockdowns and curfews to contain the spread of the coronavirus.

“How can anyone stay home without anything to eat?” asked Garcia Landu, a motorcycle taxi driver in the bustling Angolan seaside capital of Luanda.

He ventured out to try and earn a living, defying the government-ordered anti-coronavirus restrictions.

“We have responsibilities towards our families. We have to go out and get food,” said Landu, sporting a helmet in the national red-and-black colours.

Days after the government declared a state of emergency and imposed restrictions on March 26, crowds continue to mass at markets, in front of shops or by water points in Luanda.

Under the restrictions, President Joao Lourenco has banned travel, meetings and public activities as the country reported 10 infections with two deaths.

“The situation demands… sacrifices from all citizens, whose rights and professional and social life will have to be restricted,” Lourenco said in a televised speech last week.

But not to the point of depriving people of water, retorted Quechinha Paulina, a widow who has no running water in the heavily-populated Cazenga municipal district in the capital of the oil-rich country.

So she is forced to buy from private water bowsers. She placed an order and still awaits delivery.

“I have nothing at home. I have children,” she said, complaining that nearly a week into the new month, she hasn’t received her social grant payment yet.

Despite the lockdown, many view earning money, finding food and fetching water as legitimate reasons to leave home.

Announcing a slew of measures to help keep people at home, the government also promised to distribute water in disadvantaged neighbourhoods.

Telephone operators have joined in by offering free call minutes to avoid queues of people buying airtime recharge vouchers at their outlets.

But all that has failed to empty the streets of Luanda.

On the eve of the state of emergency, the police chief, Paulo de Almeida, vowed to hammer home the message about the seriousness of the virus.

“But we will not tolerate disobedience,” he warned. “It’s a question of everyone’s health.”

On Friday, Interior Minister Eugenio Laborinho reported that 1,209 people had been detained in just days, more than 1,000 of them for having entered Angola after the borders were shut on March 27, and 189 for violating the state of emergency.

“The police are not on the ground to please (people) or to distribute chocolates,” Laborinho told journalists. “People are stubborn anyway, they know they have to stay home”.

The lockdown order has largely gone unnoticed in the daily grind and hustle on the capital’s streets.

“The disease is dangerous, we see that. Everyone sees that, everyone knows,” said Domingos Joao, a taxi driver.

“But (by) staying at home, we won’t achieve anything. That is why we are in the streets, working with (and obeying) the rules, as you see.

“Before passengers climb in, they are disinfected first,” he said showing a bottle of hand sanitiser.

Out doing his shopping, teacher Geraldo Dala, is fearful that “if COVID-19 starts spreading here, that will be it! Thousands will be infected”.

But he justified his and others being out on the streets because “people have to go out for bread or a kilo of rice”.

“The state of emergency will not be respected as long as people depend on street hawking to feed their families,” said veteran journalist Rafael Marques.

Marques, who is usually critical of the government, agrees the emergency steps “were taken for the good of the people”.