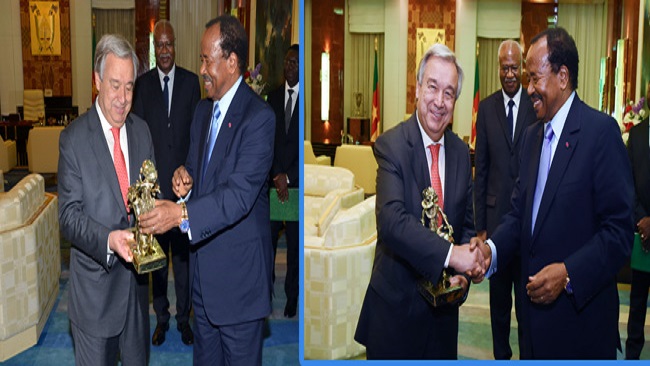 As more and more civilians have been killed by the Cameroon government of Paul Biya, absentee president for 37 years, UN Secretary General Antonio Guterres has largely been silent.

Inner City Press was informed by sources in Guterres’ own 38th floor office that Guterres had made a deal with Biya’s UN Ambassador Tommo Monthe as chair of the UN Budget Committee for administrative favors in exchange for silence on the slaughter or “subduing” of the Anglophone minority.

Others are speaking up, in their way:

“The International Rescue Committee (IRC) and the Norwegian Refugee Council (NRC) call upon all parties to the conflict in the North-West and South-West regions of Cameroon to uphold international human rights and international humanitarian law and cease all attacks on civilians without delay.  The crisis destabilizing the English speaking parts of Cameroon has taken a worrying turn, with an increasing number of reports of targeted attacks against civilians, property and violations of the humanitarian space.

More than 700,000 people are displaced, nearly 1 million children are out of school, and the humanitarian needs are mounting.  Survivors have shared testimonies of gruesome attacks that have left children orphaned, people homeless, and limited or cut off access to public facilities such as hospitals and schools. “I have been out of school for two years. The boys stopped us from going to school. They would beat you if you tried,” said Charlene, a 23 year-old single mother. “My teacher wanted to give us private classes so we could sit our exams, but they took and tortured him”.

The conflict would take even more from Charlene when her home was burned down by the military. “There was fighting and the boys hid in our corridor. The military set fire to the house to catch them. We became homeless. We lost everything.”

Reports indicate that an incident on February 14 in Ngarbuh Village, North-West Cameroon, left 24 killed, most of whom were women and children. This is only one of several incidences of disturbing attacks, many of which remain undocumented and impact directly the civilian population.  NRC, the IRC and partners have also witnessed attacks on civilians during humanitarian distributions.

“We cannot silently witness defenceless civilians, who are already suffering from extreme deprivation, being attacked while seeking lifesaving assistance,” said Maureen Magee, NRC Regional Director for Central and West Africa. “People in need of humanitarian assistance must be allowed to access necessary support, without having to fear for their lives.”

On February 16 Inner City Press from its sources in Cameroon reported on the killing of more than two dozen civilians including children in Ngar in NW Cameroon.

There was no answer, and with Dujarric on vacation in Orlando, Florida, Eri Kaneko fielded only two questions at a ten minute long noon briefing on February 17 that Inner City Press was banned from entering and asking at.   Since then Guterres, Dujarric and Melissa Fleming have refused to answer daily questions from Inner City Press on what has become their genocide in Cameroon.

Now one of the witnesses who exposed the Biya government’s mass killing at Ngarbuh, Mallam Danjuma has been killed and dumped in Bui by government forces in Kikaikelaki. And from the UN of Guterres? Nothing. This is Guterres’ genocide.