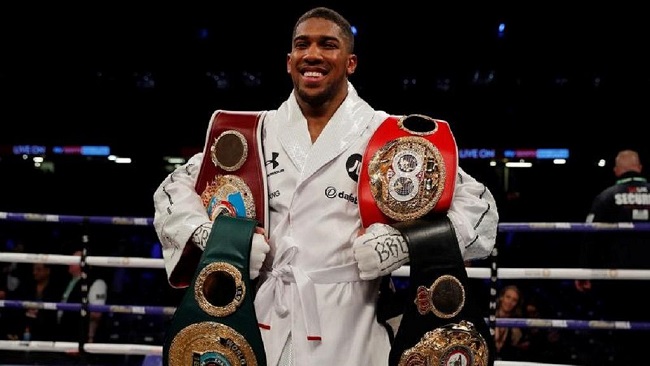 British heavyweight boxer of Nigerian descent Anthony Joshua will at a point consider staging a fight on the continent, his manager has confirmed to Sky Sports.

The venue of choice will not be in Nigeria’s bustling Lagos or administrative city of Abuja. It could well be in southern Africa, specifically in Democratic Republic of Congo.

“[Promoter Eddie Hearn] is exploring an option in [Congo]. There has been an approach,” Sky Sports quoted Joshua’s manager Freddie Cunningham as saying.

“For the next fight, Africa is not the right time. But at some point he 100 per cent wants it,” Cunningham added.

If confirmed anytime in the future, Joshua will be following in the footsteps of former world boxing icon, Mohammed Ali, whose “Rumble In The Jungle” win over George Foreman in 1974 in the then Zaire, present day DRC, is labeled an all time-classic.

Back in 2016, Joshua openly spoke about his desire to stage a fight in West Africa – between Ghana and Nigeria. “Yeah, definitely. It’s been done before. It made massive news and was history. I think that would be massive. I would not turn that opportunity down,” he said at the time.

Adding that “I’d like it to be in Nigeria or Ghana. Either one is good for me, anywhere. There’s no way I wouldn’t fight there. It would be class, the whole history of it. It would work.”

Full name is Anthony Oluwafemi Olaseni Joshua, he is popularly referred to in boxing circles by the alias, ‘AJ.’ He has undertaken trips to Nigeria in the recent years walking the streets of Lagos and meeting with political actors.

Joshua has traditionally fought in the United Kingdom. His first bout outside was his shock loss to Andy Ruiz early this year. He reclaimed all his titles in a rematch dubbed “Clash on the Dunes” staged in Riyadh, Saudi Arabia.

His team confirmed that among his most likely opponents are Kubrat Pulev or Oleksandr Usyk in that order. The venue of choice is Tottenham’s new stadium in London, they further disclosed.

Anthony Joshua was born in Watford to a Nigerian mother and a British father of Nigerian and Irish descent. He has lived some parts of his life in Nigeria until his boxing debut in 2013.

Joshua expressed interest in representing Nigeria at the 2008 Olympic Games in Beijing, but wasn’t selected. He has since climbed the ladder to be the unified World Heavyweight Boxing Champion under the British flag.