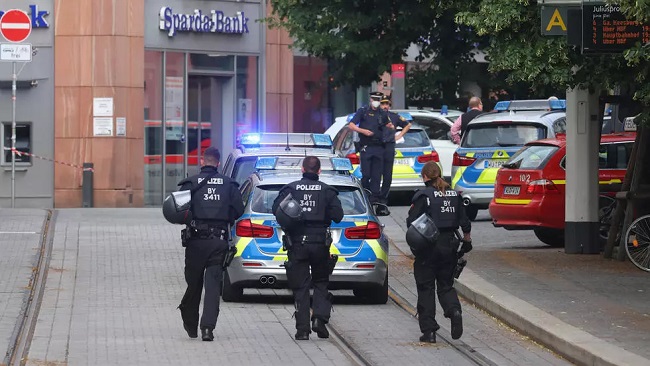 Several people were killed and others injured on Friday in the southern German city of Wuerzburg, police said, with media reporting a knife attack.

“The attacker was overpowered after the police used firearms. There are several injured as well as fatalities,” said police on Twitter, without giving details on the suspect’s motives.

German news outlets reported that the suspect had attacked people in the city-centre with a knife.

Police were able to arrest the man after shooting him in the leg, the Bild newspaper reported, adding that at least three people were killed and six others injured.

While the motive and full identity of the perpetrator have not yet been established, Germany has been on high alert after several deadly Islamist extremist attacks.

Suspected Islamists have committed several attacks in Germany in recent years, the deadliest being a truck rampage at a Berlin Christmas market in December 2016 that killed 12 people.

The Tunisian attacker, a failed asylum seeker, was a supporter of the Islamic State jihadist group.

More recently, one man was killed and another seriously injured in an Islamist knife attack in the city of Dresden in October.

A 20-year-old Syrian jihadist in May received a life sentence for the homophobic attack.

In August, six people were injured in a series of motorway accidents in Berlin in what prosecutors described as a suspected Islamist attack.

The number of Islamists considered dangerous in Germany rose sharply between 2015 and 2018, according to security services.

But numbers have declined since then, with just 615 considered dangerous by the latest count — compared with 730 in January 2018.

On top of that, there are also 521 people “who have attracted the attention of the security services but have not yet reached the stage of being considered dangerous”.

Chancellor Angela Merkel has allowed in more than one million asylum seekers since 2015 — a decision that has driven the rise of the far-right Alternative for Germany (AfD) party, which charges that the influx spells a heightened security risk.

But beyond Islamist attacks, there have been other assaults by knife-wielding people.