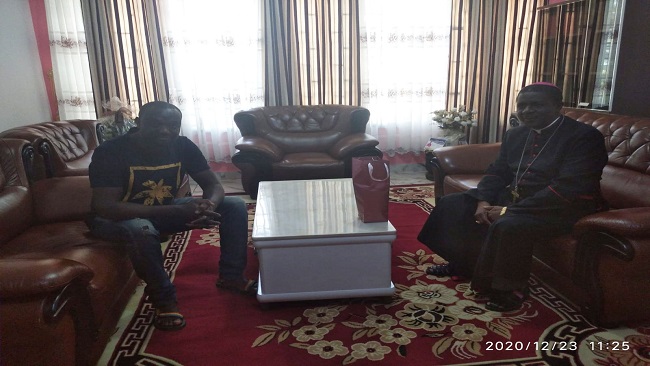 The Chairman of the Cameroon Catholic Community in Germany has described the relationship of the parish pastoral council with the Diocese of Mamfe which was introduced by Bishop Emeritus Francis Lysinge as truly remarkable adding that “The challenge the Cameroon Catholic Community in Mulheim an der Ruhr in Germany faces is not just about reopening communications with the Diocese of Mamfe but also establishing cooperation between the two entities.”

Chairman Julius Ndifor held a very intensive and productive meeting with the Metropolitan Archbishop of the Bamenda Archdiocese and the Apostolic Administrator of the Diocese of Mamfe, His Grace Archbishop Andrew Nkea.

The Archbishop was very begeistert that the Pastoral Council addressed a letter to him with the intention of recommencing cooperation.

Chairman Ndifor reportedly described the historic meeting as warm, welcoming and positive, especially as the Metropolitan Archbishop was pleased as he received a Christmas greeting card from the Cameroon Catholic Community in Germany.

For his part, the Archbishop agreed to reopen cooperation channels with the Cameroon Catholic diaspora community in Germany.

Archbishop Andrew Nkea paid tribute to the way in which lay men and women in Mulheim clearly took on responsibility to keep the faith in the Roman Catholic Church and added that the Diocese of Mamfe will look at how it can continue to help the Cameroon Catholic Community in Mulheim to mature, to develop and to become sustainable as times change.

Archbishop Andrew Nkea reminded the Cameroon Catholic Community German emissary of the new missionary mode as decreed by the Holy Father Pope Francis which is that of reaching out to young people, fostering programmes of faith formation and development, ensuring that each community is a caring presence in the wider community in which it exists.