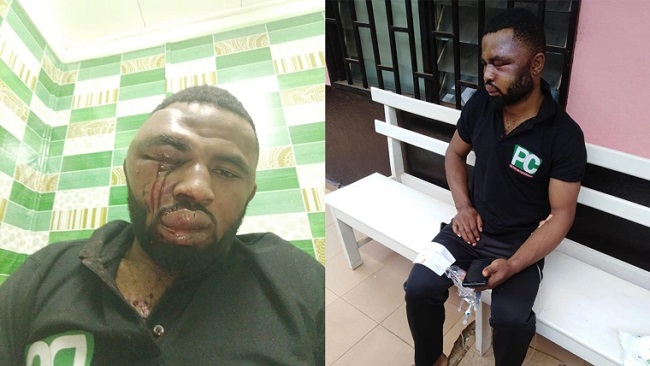 Cameroonian authorities should immediately investigate an attack on Paul Chouta, a reporter for the privately owned news website Cameroon Web, and ensure those who assaulted him are held accountable, the Committee to Protect Journalists said Friday.

On Wednesday evening, Chouta was watching the UEFA Champions League soccer game between Real Madrid and Paris St. Germain with friends in a snack bar in the Damas district of the capital Yaoundé when three unidentified men in a green pick-up truck abducted the journalist, drove him to the outskirts of the city, and viciously kicked and beat him with stones, bricks, a baton and a whip, according to a statement by his employer reviewed by CPJ, media reports, and the journalist, who spoke to CPJ via messaging app.

In the statement, Cameroon Web editor-in-chief Emmanuel Vitus was unable to say what report may have prompted the latest attack; he told CPJ via messaging app that this was not the first time that Chouta was attacked for his journalism and that the reporter, and his family should be placed under police protection while the assault was investigated. Vitus described the assault as “an attack on freedom of the press and on democracy,” adding that Chouta was a “courageous journalist and whistleblower.”

“Cameroonian police must thoroughly investigate the latest attack on Paul Chouta, a journalist and outspoken critic of the government, and bring swift justice to those responsible,” said Angela Quintal, CPJ’s Africa program coordinator. “Failure to act will reinforce perceptions that impunity for crimes against journalists is the order of the day in Cameroon and that journalists like Paul Chouta are simply not safe in their own country.”

Chouta went outside during half-time and was accosted by men wearing civilian clothes, who carried him across the road and threw him in the vehicle, the journalist told CPJ. Chouta shouted for help, but his attackers pushed him into the pick-up truck and used his shirt to blindfold him, he said. Chouta said he believed he had been tailed and that a few miles down the road the men stopped the car and picked up a fourth man.

The men drove Chouta to the outskirts of the city, near the airport, where he was told to kneel and was severely beaten and kicked for about four minutes before he fell unconscious, he told CPJ. “They told me that I’m stubborn and that I never learn a lesson,” Chouta said. “They said this time they will kill me, as I wanted to show that I was a hero.”

Chouta said he was left for dead. When he regained consciousness, he said he had been stripped naked; his wallet, identity, and bank cards had been taken; and he was unable to see out of his left eye, had a swollen face and ear, and was in great pain.

The journalist walked naked and barefoot for about two miles (three kilometers) before he was helped by strangers. He was able to remember his girlfriend’s telephone number and they called her to take him to the hospital, Chouta said.

Chouta spent Thursday night in the hospital and is expected to be discharged today to seek treatment at another medical facility, according to the reporter and his editor.

Chouta told CPJ that he had been interviewed at the hospital by police this morning and was told that a knife had been found where he was attacked. Video footage from the snack bar’s closed-circuit camera was also taken by police, he said.

Police spokeswoman Joyce Ndem replied to CPJ’s request for comment by saying it should send a representative to talk to her in her office in Yaounde. She did not reply to a subsequent text via messaging app.

In February 2019, Chouta was attacked outside his home following political coverage, as CPJ documented at the time. Four months later, he was arrested on charges believed to be politically motivated. He was jailed for nearly two years until a court in May 2021 found him guilty and sentenced him to 23 months, which he had already served, and released him.

Culled from Committee to Protect Journalists