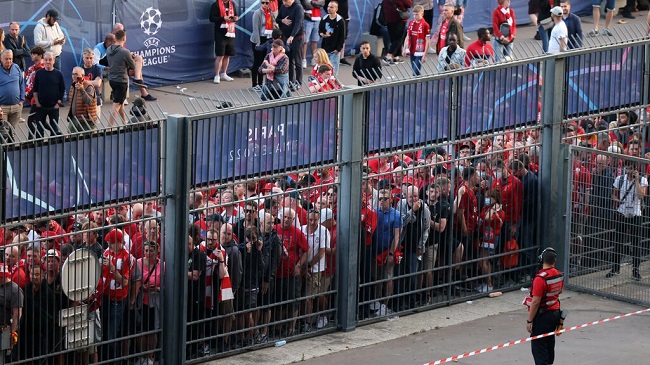 Liverpool chief executive Billy Hogan has accused the French authorities of trying to “deflect responsibility” for the chaotic scenes that marred the Champions League final in Paris.

UEFA have announced an independent review into scenes outside the Stade de France on Saturday that saw supporters funnelled into overcrowded corridors and hit with tear gas and pepper spray from police.

Kick-off to the match, which Real Madrid won 1-0, was delayed by 36 minutes to allow supporters extra time to access the stadium.

However, that account has been strongly rejected by Liverpool fans who have pointed to a series of organisational failings around the stadium and the heavy-handed response from police.

Oudea-Castera initially blamed Liverpool for helping to cause the mayhem, telling a French radio station that the club failed to properly organise its supporters who went to Paris.

“We just feel that everyone should be focused on getting the investigation right and less about making inflammatory comments that attempt to deflect responsibility for what happened on Saturday night,” Hogan told the Liverpool website.

“We should know all the facts to make sure that the scenes that we’ve all seen – absolutely disgraceful – from Saturday don’t ever happen again.”

Family members and friends of the Liverpool squad were caught up in the scenes outside the stadium.

Left-back Andy Robertson said a friend he had given a club ticket to was denied entry and accused of carrying a fake ticket.

The wife of Thiago Alcantara, Julia Vigas, posted on Instagram: “Due to a lack of organisation and security, there were so many scary moments.”

Vigas added: “Something has to be done, these kind of things cannot happen in any kind of event and we ask for responsibility. It could have been much worse.”

UEFA initially blamed the late arrival of fans for the problems before later issuing a statement referring to fake tickets as the cause.

“To say our fans didn’t turn up on time is crazy,” added Hogan.

“My colleagues across the club, our ownership and I, we all saw it with our own eyes. We were outside the ground, on the ground, in those crowds and from everything I saw, our fans arrived early and they were queueing as directed by authorities.”

Liverpool have begun compiling their own evidence with supporters and other people present invited to report their experiences via a feedback form on their website.

Fans have compared the dangerous scenes outside the stadium to the Hillsborough disaster in which 97 Liverpool fans were killed in a crush in 1989.

UEFA said their own independent review, led by Portugal’s Dr Tiago Brandao Rodrigues “will examine decision making, responsibility and behaviours of all entities involved in the final.”