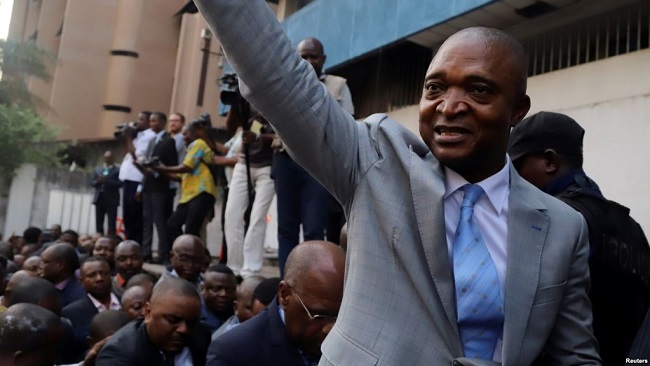 Joseph Kabila’s preferred successor as president of the Democratic Republic of the Congo will face a credible election challenge in December from two opposition leaders, the final list of candidates published Wednesday
showed.

Kabila has ruled since his father’s assassination in 2001. He agreed last month not to defy term limits and stand for re-election, opening the door to the Central African nation’s first democratic transfer of power.

His announcement calmed tensions that have seen dozens of anti-Kabila demonstrators killed by security forces since he refused to step down when his constitutional mandate expired in December 2016.

Kabila is backing Emmanuel Ramazani Shadary in the long-delayed Dec. 23 election. His biggest challengers are likely to be Felix Tshisekedi, the president of Congo’s largest opposition party, and Vital Kamerhe, who placed third in the last election in 2011.

But in all, 21 candidates have been approved for the single-round contest, including several other prominent Kabila critics, which risks diluting the opposition vote and boosting Ramazani’s chances.

The authorities’ exclusion from the race of other leading opposition figures, including former Vice President Jean-Pierre Bemba and ex-provincial Governor Moise Katumbi, has also raised questions about the election’s fairness.

The opposition accuses Kabila’s camp of plotting to rig the elections with untested electronic voting machines, a charge the ruling coalition rejects.

In a rare opinion poll in July, Katumbi and Tshisekedi each received 19 percent support. Bemba received 17 percent and Kamerhe got 9 percent.

Ramazani did not receive enough votes to figure in the results but is expected to now benefit from the ruling coalition’s financial and institutional muscle.

Opposition leaders have repeatedly said they intend to coalesce behind a single candidate but have traditionally struggled to present a united front. In 2011, Kabila won with 49 percent of ballots cast as the opposition vote split.

Bemba was disqualified by the constitutional court earlier this month over a witness-tampering conviction, while Katumbi was prevented from re-entering the country last month to register his candidacy after two years in exile.

The electoral commission also validated more than 15,000 candidacies for parliamentary elections due to take place the same day.