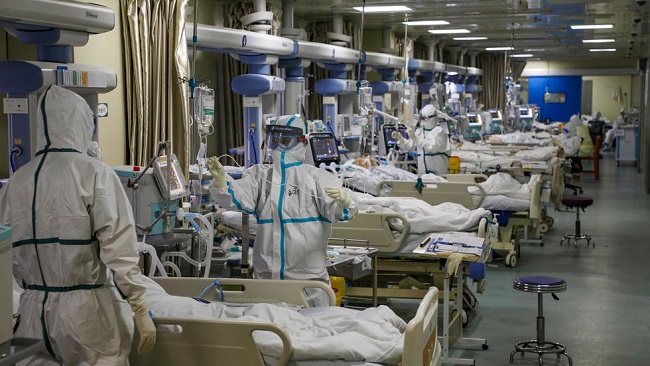 Coronavirus death toll in Italy overtakes China’s after rising to 3,405 0

Italy’s death toll from coronavirus overtook that of China, where the virus first emerged, on Thursday as hospitals said they were being overwhelmed and the government prepared to prolong emergency lockdown measures.

A total 427 deaths were registered in Italy over the past 24 hours, bringing the total nationwide tally to 3,405 since the outbreak surfaced on Feb. 21. China has recorded 3,245 deaths since early January.

Officials and experts believe the total number of infections there is significantly higher, with testing largely limited to those arriving for hospital care. The country’s large, elderly population, who are particularly vulnerable to the virus, is also seen as factor for the high number of fatalities.

“We’re working in a state of very high stress and tension,” said Daniela Confalonieri, a nurse at a hospital in Milan, the capital of the wealthy northern region of Lombardy, which has been the epicentre of the epidemic.

“Unfortunately we can’t contain the situation in Lombardy. There’s a high level of contagion and we’re not even counting the dead any more,” she said.

Underscoring the scale of the drama, soldiers transported bodies overnight from the northern town of Bergamo, northeast of Milan, whose cemetery has been overwhelmed.

An army spokesman said 15 trucks and 50 soldiers had been deployed to move coffins to neighbouring provinces. Earlier local authorities had appealed for help with cremations as their own crematorium could not cope with the huge workload.

“Look at the news that’s coming out of Italy and take note of what the situation really is like. It’s unimaginable,” said the Milan nurse, Confalonieri.

Italy went into virtual lockdown before other countries in Europe but, with cases still rising, the government is considering even tougher measures that would further restrict the limited amount of outdoor movement currently permitted.

Luca Zaia, governor of the Veneto region neighbouring Lombardy, demanded stronger curbs from Rome, including closing all shops on Sunday, and said if they were not passed, he would consider passing a regional decree.

“I hope there will soon be measures to restrict people jogging or going out for walks. I’m sorry about that, but the alternative is intensive care, hospitalisation and contagion,” he said.

At the other end of the country, in Sicily, the regional governor said the army would now help police make spot checks to ensure only people with legitimate reasons were out.

Police across Italy have stopped more than 1.2 million people over the past week and booked some 51,000 for violating the rules, the interior ministry said on Thursday.

The measures currently order most shops to stay shut until at least March 25 and schools till April 3. He did not say how long schools would have to remain closed.

Education Minister Lucia Azzolina told SkyTG24 television that schools would reopen only when there was “certainty of absolute safety”, adding that the end of the school year would depend on how well online lessons went in coming weeks.

The contagion is also badly damaging Italy’s economy, which had already been on the brink of recession before the virus struck last month and the government imposed a nationwide clampdown, causing many businesses to grind to a halt.

The Treasury has announced a 25 billion euro ($26.84 billion) package of measures to support companies and workers and sources said it was considering extending guarantees on bank loans to help firms hit by a collapse in orders. ($1 = 0.9315 euros).