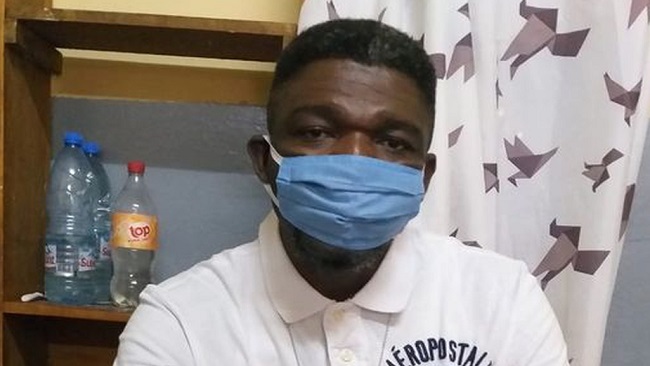 On the morning of April 24, Fritz Takang became so breathless he could barely walk across the cramped cell he shared with 60 inmates at the main prison in Cameroon’s capital, Yaounde.

That night, he said, he was evacuated with five others to an apartment complex that was being used to quarantine suspected COVID-19 cases.

Near dawn the following morning, Takang, 48, heard a fellow inmate in distress in a neighbouring room. With no doctors present, he said, he went to the man’s bedside and laid a hand on his feverish forehead. Moments later, the man died.

“I prayed for him before the last breath,” Takang, a pastor, said. “I asked God to soften his pain.”

Correctional facilities worldwide have been fertile ground for COVID-19, the disease caused by the new coronavirus.

Africa’s prison population of more than one million is especially vulnerable because of overcrowding, malnutrition and limited healthcare, health experts say. Patchy testing and reporting have frustrated efforts to track and contain its spread – both behind bars and in the community.

Authorities in Togo, Democratic Republic of Congo, South Africa and Kenya have reported outbreaks in their prisons.

Cameroon’s government has not publicly acknowledged infections inside its correctional facilities, although President Paul Biya signed a decree on April 15 to de-congest prisons in an effort to contain the virus.

About 1,800 inmates were freed by May 8, according to preliminary figures from the Office of the U.N. High Commissioner for Human Rights. The government has not provided numbers.

Hundreds of cases of COVID-19 were recorded among the inmates released from five prisons dotted across Cameroon’s central region in April, according to government data seen by Reuters which has not been made public.

Some were allowed home before their test results came in, while others were released with little or no screening to determine if they could be at risk of spreading the virus into the community.

Yaounde Central Prison, where Takang is held, was the worst hit, according to the data. The prison did not reply to requests for comment.

Behind its mouldy walls, the virus appears to have swept through packed, squalid cells, overwhelming its ill-equipped infirmary, according to interviews with over a dozen current and former inmates, four prison officials and two lawyers.

Some asked not to be identified for fear of reprisals. Prisoners are not officially allowed to possess phones, but many do.

More than 31 inmates have died there since the beginning of April, compared with the usual one or two a month, a senior prison official told Reuters, adding that none were tested for COVID-19.

A Cameroon health ministry spokesman declined to comment, as did officials at the prison authority and a leading official in the coronavirus response. The justice and communications ministries did not respond to questions sent via Whatsapp, email and in person.

Two sources present at recent health ministry briefings that were not open to the press said the government has made efforts to stem the spread of the virus in prisons, often struggling with limited resources and manpower.

“I am sure a thousand people are infected,” Takang said in a croaky voice from an isolation bed at the Cameroonian Presbyterian Church Hospital in Yaounde, where he was taken on April 25. “You cannot leave your room without passing a hundred people. It is a horror.”

The inmate population exceeds prison capacity in 42 of the 47 African countries and territories where data is available, according to the World Prison Brief, a database compiled by the Institute for Crime and Justice Policy Research (ICPR) at Birkbeck, University of London.

In Europe, prisons are over-full in 17 of 57 countries and territories.

“This is a ticking time bomb. Prisons in Africa are already struggling to provide the most elementary standards of sanitation,” said Catherine Heard, director of the World Prison Research Programme at ICPR.

Cameroon has around 15,000 confirmed cases of COVID-19, one of the worst infection rates in sub-Saharan Africa, with more than 350 deaths.

Of 832 samples collected from inmates released from five prisons in April, 358 tested positive for COVID-19, according to the unpublished government data – 16% of the national total at the beginning of May.

The majority of positive samples came from Yaounde Central Prison, Cameroon’s largest, where the infection rate of those released and tested was 58%. Its population is still around 3,000, three times capacity, said the senior prison official.

Many who tested positive were quarantined. But dozens were allowed home before their results came back or without being tested, according to three prisoners released in April and May, and a guard who oversaw releases.

“I signed my release papers; they opened the gates and let us out,” said one inmate who said he was freed on May 22 with 15 others without testing.

Others fled quarantine, the guard said. He could not say how many.

Takang spent two weeks in hospital before returning to prison. A vocal supporter of Cameroon’s Anglophone separatist movement, he has been confined there for over a year on charges of sponsoring terrorism, which he denies. His trial is ongoing.

His test result for COVID-19, seen by Reuters, was negative. He tested positive for malaria and typhoid, he said.

While he was in hospital, inmates and prison staff said they noticed an unusual number of people with coughs and fevers. Inmates cut up bed sheets and old t-shirts to make masks, they said.

“There is fear everywhere. Everyone has the feeling that they are next,” said Mancho Bibixy Tse, a 36-year-old inmate reached by phone.

The prison infirmary, made up of a dozen metal beds with thin mattresses, overseen by one doctor and a few nurses, was quickly overwhelmed. By mid-April, patients lay three to a bed, said three inmates treated there. Patients bought medication from outside the prison – if they could afford it.

Inmates, prison staff and their families were given the anti-malarial drug chloroquine, although there is no firm evidence to show it is effective against COVID-19.

Disposable masks and buckets of water and soap were placed in cell blocks so inmates could wash their hands.

But overcrowding makes social distancing impossible, some inmates and guards said. In some quarters, hundreds of men share one pit latrine. Dozens are crowded into cells of no more than 25 square meters.

“I am lucky that I am in a room with just 15 people. Some rooms you have to walk over (sleeping) bodies to get out,” said Tse.

When an inmate dies, their family has 24 hours to collect the body, the senior official said, no small task in a country the size of Spain with threadbare transport links.

Of the 31 who died in April and May, the official said, only four were collected. The rest were taken away by authorities for burial.

Deaths have continued since, the official said, but he has stopped counting.