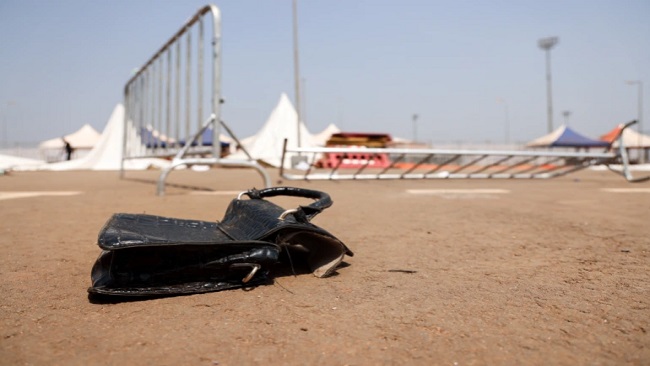 Families of eight people who died in the January football stampede at Yaounde’s 60,000-seat Olembe stadium say they are burying their dead without assistance from Cameroon’s government or the Confederation of African Football. The stampede, which also injured 38, occurred ahead of an Africa Football Cup of Nations match between Cameroon and Comoros Island.

A Roman Catholic Church choral group sang on Friday at a viewing ceremony at Mbalmayo, a commercial town about 50 kilometers to the south of Cameroon’s capital, Yaounde.

Several hundred people, including teachers, students and merchants came to pay their last respects to Veronique Djilo, a teacher and one of those killed as crowds struggled to get into the stadium to watch the Cameroon national team play against Comoros Island on January 24.

Among the mourners was Etienne Modji, Djilo’s older brother. Modji said it was not easy for him to buy a casket and transport his sister’s body to Bandjoun, a western commercial town where Djilo was born. He said he has not been able to buy enough food for the hundreds of people coming to pay their last respect to Djilo.

Modji said he has not seen the money Cameroon state radio said Cameroon’s Indomitable Lions football team contributed for the injured and families of those killed in the Olembe stadium crush. Modji said his relatives and well-wishers donated money to help his family prepare for his sister’s burial.

Veronique Djilo was a person living with disabilities. She had no lower limbs and was teaching in Mbalmayo.

Emmanuelle Tchotchom, executive president of the nongovernmental organization Inclusive Society for Persons Living with Disabilities said at least 60 people with disabilities traveled to Mbalmayo, ready to accompany Djilo’s body to Bandjoun for burial. Tchotchom said the government did not transport neither Djilo’s body nor the people with disabilities accompanying the casket to Bandjoun, as her association had requested.

Tchotchom said only 12 of the 60 people who wanted to make the trip could afford the fares to and from Bandjoun, where Djilo was buried Saturday.

Three other crush victims have been buried in Yaoundé. Their families also say they did not receive any assistance from the government or the Confederation of African Football, CAF, which organized the tournament.

CAF President Patrice Motsepe visited injured victims at the hospital on January 25 and said it was the duty of host nations to take care of the security and safety of football players, fans and match officials. Motsepe said it is the host country that takes care of injured persons and families of the bereaved.

Cameroon’s team said it donated $85,000 to injured victims of the stampede and family members of those who died.

The injured victims and family members of the dead said they do not know where the money is.

Sports and Physical Education Minister Narcisse Mouelle Kombi would not comment this week when asked about the promised assistance to crush victims. He said, though, the injured were treated free of charge as instructed by Cameroonian President Paul Biya.

Cameroon Football Federation officials did not answer reporters’ questions on the whereabouts of the money the Indomitable Lions said they donated.