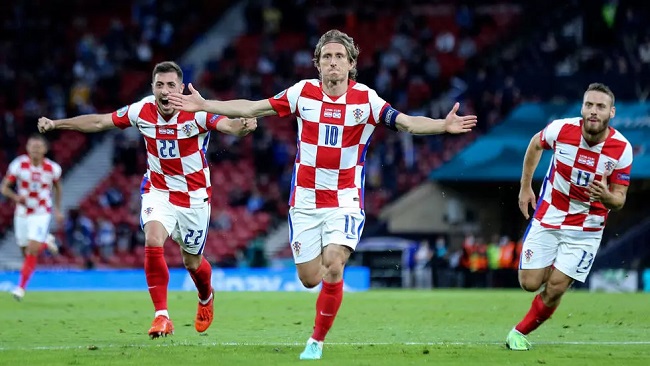 Croatia secures spot alongside England, Czech Republic in Euro 2020 round of 16 0

Croatia advanced to the knockout phase of the European Championship after its win over Scotland on Tuesday. England and the Czech Republic, also in Group D, had already secured spots in the round of 16 before their game.

It was a big day for the Croatian football team.

Luka Modric curled home a magnificent finish as Croatia shrugged off a slow start to Euro 2020 to beat Scotland 3-1 on Tuesday and reach the last 16 in style, while leaving their opponents again on the tournament scrap-heap.

Nikola Vlasic and Ivan Perisic were also on target for Croatia in a victory that lifted Zlatko Dalic’s side, so leggy and unconvincing in their first two games, up to second in Group D on four points.

Modric’s form had been called into question at the tournament, but the 35-year-old shaped a delightful finish into the corner of the net with the outside of his foot in the second half to make it 2-1, sending his side on to a thoroughly deserved victory.

He fell to his knees at the whistle for about a minute before rising to his feet and pumping his fists in celebration.

Deprived of Billy Gilmour, who failed a COVID-19 test in the buildup, Scotland seemed lacking in midfield and Croatia bossed the ball, dominating possession for large periods before deservedly taking the lead after 17 minutes as Vlasic scored his sixth goal for his country.

Croatia next face the runner-up of Group E – where Sweden, Slovakia, Spain and Poland are all still jockeying for position – in Copenhagen on June 28.

Meanwhile, England clinched first place in Group D with a 1-0 win against the Czech Republic after Jack Grealish drove down the left and chipped the ball towards the back post in the 12th minute for Raheem Sterling to head in.

The Manchester City midfielder scored England’s only other goal at the tournament in the opening win over Croatia.Both England and the Czech Republic had already advanced to the round of 16 before the match.

France and Sweden have already qualified for the round of 16.