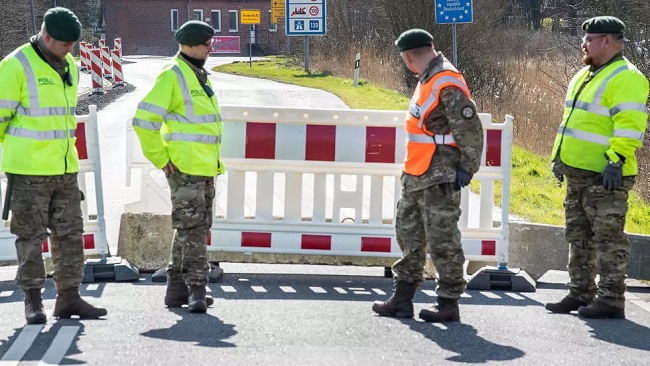 Europe’s cherished Schengen network of open internal borders is on the brink of collapse as more and more countries shut their doors in a frantic effort to stave off the coronavirus pandemic, even as experts warn such tactics will delay its spread – but not halt it.

At his daily briefing on the coronavirus emergency on Friday, Luca Zaia, the governor of Italy’s Veneto region, one of Europe’s worst-hit, told reporters that Europe’s borderless zone was “disappearing as we speak”.

“Schengen no longer exists, it will be remembered only in the history books,” Zaia said, pointing to the long lines of traffic stuck at Italy’s northeastern border, where Austrian officials have reintroduced stringent controls.

With Italy reporting the most virus cases and deaths anywhere in the world except China, the pandemic is increasingly wearing on the EU’s cherished core principle, which envisions a border-free Europe where citizens can freely live, work and travel.

Austria became the first country to impose drastic curbs on travel from Italy on Wednesday, urgently reinstalling border checkpoints in the exact spots where they had been dismantled back in 1997 when the country joined the Schengen Area.

All travellers seeking to cross the Brennero border from Italy are now required to present health certificates proving they have not contracted the COVID-19 virus – a measure that has slowed traffic on the busy Alpine crossing to a near standstill.

Since then, Slovenia and Switzerland, which also border Italy, have imposed similar curbs. But several other EU nations – including Poland, Slovakia, the Czech Republic and Cyprus – have announced restrictions that go far beyond travellers from Italy.

“Most of the cases that have been propagating the coronavirus epidemic in Poland are imported cases,” Poland’s Prime Minister Mateusz Morawiecki told reporters as he announced the closure of his country’s borders with all its neighbours starting at midnight on Saturday.

“We don’t want the coronavirus to head our way in droves.”

The successive border closures came as the World Health Organization (WHO) announced on Friday that Europe had become the pandemic’s current “epicenter” after reporting more cases and deaths than the rest of world combined, excluding China.

More than 22,000 cases of COVID-19 have been confirmed across Europe, and nearly 1,500 people with the virus have died on the continent – most of them in Italy.

While the virus is spreading across the continent, the rushed actions taken by individual states are highlighting the lack of a coordinated approach to fighting the coronavirus – not least among the European Union’s 27 member states.

The European Commission, the EU’s executive body, has recommended coordinated health screenings at the borders as a way to address infections, rather than border closures.

“We’ve seen travel bans and controls being put in place in a number of member states,” European Commission President Ursula von der Leyen told reporters on Friday. “Certain controls may be justified, but general travel bans are not seen as being the most effective by the World Health Organization. Moreover, they have a strong social and economic impact. They disrupt people’s lives and business across the borders.”

To avoid a patchwork of national policies that are ineffective and cause economic harm, “any measure that is taken must be proportionate” and coordinated with Brussels, she said, suggesting that preliminary checks for signs of infection could be done at the Schengen Area’s borders, both internal and external.

“Member states, especially neighbouring ones, need to work very closely together,” Von der Leyen said. “In this way, and it’s the only way, we can make sure that our citizens receive the healthcare that they need immediately, wherever they are.”

But Von der Leyen’s commission, along with other EU institutions, has a very limited role to play in combating the COVID-19 pandemic. It polices the Schengen Area’s rules, but individual countries are responsible for their own health and public safety policies.

In a sign of the EU’s limited power, the Danish government also announced late Friday that it was closing all of its borders – land, sea and air – to travellers. Denmark consulted with neighbouring countries prior to the announcement but not with EU officials.

“We are in uncharted territory,” Danish Prime Minister Mette Frederiksen told a news conference as he announced the travel ban. “I know that the overall list of measures is very extreme and will be seen as very extreme, but I am convinced that it’s worth it.”

In many ways, the coronavirus pandemic has exacerbated divisions that first came to the fore in 2015, when eastern and central European states closed their borders to migrants and thwarted EU efforts to implement migrant quotas across the bloc.

Hungary’s Prime Minister Viktor Orban, whose country has also banned travel from Italy, has made an explicit link between the two crises.

“We are fighting a two-front war: one front is called migration, and the other one belongs to the coronavirus – there is a logical connection between the two, as both spread with movement,” Orban told Hungarian media on Friday.

“Our experience is that foreigners brought in the disease, and that it is spreading among foreigners,” he added, in remarks that mirrored US President Donald Trump’s description of the coronavirus as a “foreign disease”.

Trump’s decision on Wednesday to slap a 30-day travel ban on people coming from the Schengen Area has stunned and angered EU officials, who were not consulted prior to the move.

“Instead of tending to the problems of his country, and to a virus that knows no borders, he thinks that he can fight it like people that have a different citizenship than American,” said German Finance Minister Olaf Scholz.

Though it has stepped up monitoring travellers for signs of infection, Germany has so far refused to close its borders. Spain and Italy have also opted to keep borders open, even as they place their own populations under lockdown.

“This virus cares not for borders, be they internal or external,” said Spain’s Prime Minister Pedro Sanchez on Friday as he said his country planned to declare a nationwide state of emergency.

‘Turn off the source’

French President Emmanuel Macron has also been critical of EU members that have unilaterally closed their borders, calling such moves counter-productive and pleading instead for coordination across the bloc. He has stressed the importance of scientific evidence, rather than ideology or political expediency, in guiding the world’s response to the coronavirus outbreak.

But just as governments are divided over how to tackle the novel virus, so is the scientific community.

In justifying Trump’s travel ban, Dr. Anthony Fauci, the top official on infectious diseases at the US National Institute of Health, noted that 70 percent of new infections could be traced to Europe.

“It was pretty compelling that we needed to turn off the source from that region,” he told a congressional panel on Thursday.

Internal blockades have proved their effectiveness in China, where the virus first originated, said Sterghios Moschos, a virologist at Northumbria University in the UK. Appearing on the FRANCE 24 Debate show, Moschos noted that the blockade of Hubei province “stopped in its tracks the transmission intensity”, thereby sparing other parts of the country.

Other medical experts are doubtful that the Chinese model would prove useful now that the disease has spread across the globe and is being passed through so-called community transmission – among people who haven’t travelled overseas.

Dr. Bruce Aylward, who led a World Health Organization team in China as the COVID-19 disease was surging last month, said countries might gain in the short term by limiting travel, but that overall “it doesn’t help to restrict movement”.

Margaret Harris, a WHO spokesperson and medical doctor currently involved in the virus response, echoed the concerns about the false comfort of closing borders as a delaying tactic.

“You divert a lot of resources when you are focused on closing borders, rather than focusing on protecting your health workers, preparing your health systems and enhancing your disease surveillance,” she told The Intercept.

Even Britain, which was initially exempt from Trump’s travel ban, has expressed scepticism about its effectiveness.

“With regard to flight bans, we are always guided by the science as we make our decisions here,” Finance Minister Rishi Sunak told BBC radio on Friday.

He added: “The advice we are getting is that there isn’t evidence that interventions like closing borders or travel bans are going to have a material effect on the spread of the infection.”