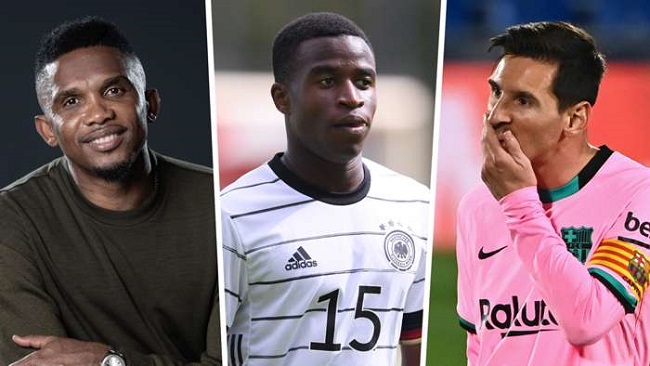 The Cameroon superstar has urged his former employers to sign the Borussia Dortmund sensation. Barcelona should target Borussia Dortmund wonderkid Youssoufa Moukoko as the long-term successor to Lionel Messi, according to Samuel Eto’o.

The 15-year-old has been included in BVB’s Champions League squad this season, even though he isn’t eligible to feature in Europe’s premier club competition until he turns 16 on November 20.

Despite not yet making his senior debut for Dortmund, Moukoko is the player Barca should be targeting as they look for a long-term successor to 33-year-old Messi according to the Argentine’s former teammate Eto’o, who was twice a Champions League winner during five years at Camp Nou.

“[There’s] a young player who plays for Dortmund called Youssoufa Moukoko,” Eto’o told Goal when asked who he’d love to see as Barcelona’s next big signing. “[He’s] 15 years of age, and he’s the next top player, for me, after Messi.

“As Messi gets older, we could prepare the future of Barcelona very well.”

Eto’o believes that Moukoko could form a dream post-Messi front three alongside France duo Antoine Griezmann and current Paris Saint-Germain attacker Kylian Mbappe, who is another player he’d love to see move to the Camp Nou.

“With Antoine and Youssoufa [up front together], that team would go forward very well,” Eto’o concluded. “[I’d like to see] Kylian Mbappe at Barcelona also.”

Messi appeared close to an exit from Barcelona at one point this summer, having handed in a transfer request following a tumultuous 2019-20 season, which saw the Catalan heavyweights humiliated 8-2 by Bayern Munich in the Champions League quarter-finals and dethroned by Real Madrid in La Liga.

The six-time Ballon d’Or winner ultimately opted to remain at the Camp Nou this term, despite reservations about the direction the club are heading in under Ronald Koeman.

Barca, who begin their Champions League campaign against Ferencvaros on Wednesday, are currently ninth in La Liga after four matches, having fallen to a 1-0 defeat at Getafe on Saturday.

German-Cameroonian forward Moukoko, who was ranked 44th in Goal’s NxGn 2020 list celebrating the 50 best wonderkids in football, is the youngest player to play and score in the Uefa Youth League.

He has already represented Germany at U-20 level, and has scored an eye-watering 134 goals in 86 appearances for Dortmund between U-17 and U-19 levels.