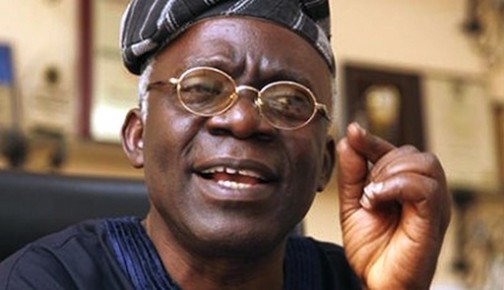 Falana To Buhari: Bring Back Nigerians Illegally Deported To Cameroon 0

Human rights lawyer, Femi Falana SAN has sent an open letter to President Muhammadu Buhari asking him to “bring back naturalized Nigerians, Refugees and Asylum Seekers who were illegally arrested, detained and deported from to Cameroon on Friday, January 26, 2018 by the National Security Adviser, Major-General Babagana Monguno (retd).”

In the open letter today Falana said “We write this protest letter on behalf of our clients whose names and status are set out in the List of Deportees attached to this letter.”

According to Falana, “Our clients are not illegal immigrants in Nigeria. Three of them are naturalized Nigerian citizens while others are recognized refugees and political asylum seekers in Nigeria.”

The letter read in part: “Twelve of our clients who are the leaders of the people of Southern Cameroon and who have been living in Nigeria for several years were assembled for a meeting at Nera Hotel, Abuja on Saturday, January 6, 2018 to discuss the challenges faced by the over 10,000 Cameroonians who have sought political asylum in Nigeria due to persecution and repression under the Paul Biya regime in Cameroon.”

“But before the commencement of the meeting a team of armed security personnel invaded the venue, abducted our clients and took them away to an undisclosed place. The said abduction was reported by the Premium Times edition of Sunday, January 7, 2018.”

“In spite of the detailed report of the credible online news medium the Police and the security agencies denied knowledge of the abduction of our clients. Consequently, all efforts made by the lawyers, doctors and family members of our clients to visit them in custody were frustrated without any legal justification. Even Mrs. Nalowa Bih who is pregnant was denied medical attention by the National Security Adviser.”

“However, a representative of the Office of the United Nations Commissioner for Refugees in Nigeria was allowed to visit our clients at the request of the Ministry of Foreign Affairs. During the visit, the United Nations representative found that our clients were held in an underground cell at the headquarters of the Defence Intelligence Agency on the orders of the National Security Adviser.”

“On account of the refusal of the National Security Adviser to allow access to our clients by their lawyers, relatives and doctors we filed an application at the Abuja Judicial Division of the Federal High Court on Thursday, January 25, 2018 for the purpose of securing their fundamental rights to personal liberty and freedom of movement.”

“Notwithstanding the pending suit and the intervention of the Office of the United Nations Commissioner for Refugees, the National Security Adviser expelled our clients from Nigeria and deported them to Cameroon on Friday, January 26, 2018.”

“Although the National Security Adviser was ashamed to disclose the deportation of our clients from Nigeria the Government of Cameroon has celebrated the deportation and threatened to prosecute our clients for unspecified crimes. Thus, with the connivance of the National Security Adviser the Government of Cameroon has since held our clients in an undisclosed military custody in Cameroon.”

“The National Security Adviser knew that two of our clients are naturalized Nigerians, six are refugees while 37 others are political asylum seekers who are entitled to be protected by the Federal Government of Nigeria. For the avoidance of doubt, the Office of the United Nations Commissioner for Refugees in Nigeria drew the attention of the National Security Adviser to the legal obligations of Nigeria to respect the rights of our clients.”

“Since the Government of Nigeria has never violated the provisions of the United Nations Convention Relating to Refugees and the OAU Convention on Refugees by deporting refugees and asylum seekers to any country where they might be persecuted we are compelled to urge Your Excellency to grant the following requests: Order the National Security Adviser to produce the missing 5 deportees and bring back to Nigeria our clients who have been illegally deported to Cameroon without any further delay.”

“If the National Security Adviser is unable to bring back our clients to Nigeria he should be removed from office for such brazen impunity which has exposed Nigeria to ridicule before the comity of law abiding nations. The Federal Government should prevail on the Government of Cameroon not to persecute our clients to prevent the United Nations from sanctioning Nigeria for violating the provisions of the 1951 United Nations Convention Relating to Refugees.”

“You will therefore agree with us that the arrest, detention and deportation of our clients from Nigeria to Cameroon by the National Security Adviser cannot be justified on the following grounds: Based on the appeal by Nigeria for a peaceful resolution of the political crisis in Cameroon the people of Southern Cameroon filed a suit at the Federal High Court to determine whether the people of Southern Cameroon are not entitled to self-determination within their clearly defined territory separate from La Republique Du Cameroun.”

“By a consent judgment delivered by the Court on March 5, 2002, the Federal Government was directed to file a suit at the International Court of Justice to have a judicial confirmation of the human right of the people of Southern Cameroon to self determination. Attached herewith and marked annexure A is a certified true copy of the judgment.”

“The Federal Government also undertook to take other measures as may be necessary to place the case of the people of Southern Cameroon for self determination before the United Nations General Assembly and other international organizations.”

“Even though the suit has not been filed at the International Court of Justice the Federal Government has continued to recognize the human rights of our clients and other people of Southern Cameroon to self determination.”