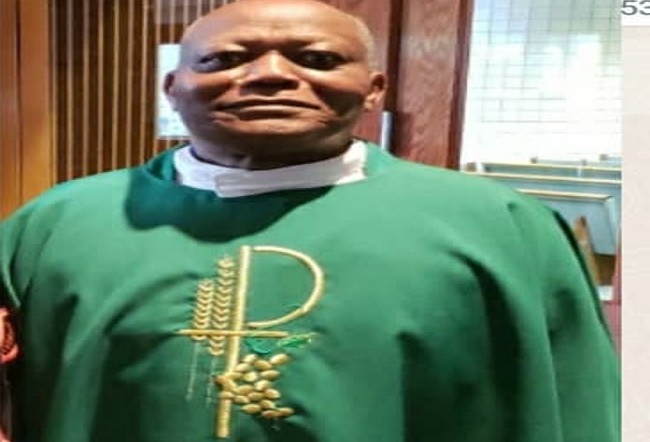 Father Etienne Khumba:  A Man full of Faith and the Holy Spirit Transitions to Eternal Glory 0

Reverend Father Etienne Khumba who transitioned into the eternal glory of the Lord on 19 September 2021, like Stephen in the Holy Bible, was a man “full of faith and the Holy Spirit”( Acts of the Apostles, 6:2 v.5) . It pleased the Lord whom he served with unreserved tenacity to call him home to eternal rest for the glory of His Holy name. Alleluia! Amen.

It is hard to pontificate on the life and times of Father Etienne, because he was a total man of God at the service of the Lord.   His life and times do not therefore need pontification. I will therefore leave pontification and medals of honour to the occasion of the death of politicians whom their earthly political leaders, peers and lackeys often rely on to attempt to counter the reality of the parable of the rich fool. Mathew.19: 16-30, Mark 10: 17-31 Luke 18: 18-30.

He has bequeathed to humanity, a life of faith and service which will remain indelible for our living memories and those of generations unborn.  Father Etienne transcended constraining barriers to reach out for all souls who were in need of the healing WORD of the Lord which were ordained by the Lord Himself. (Mathew 10: 1 – 1  “He gave them power over unclean spirits, to cast them out, and to heal all kinds of disease”. He did so in total respect of the injunction” at Mt 10 v.8, “Freely you have received, freely give”).

Those who strongly opposed this ministry, whom they wrongly perceived as a social function of the Church as opposed to a Biblical function which the Lord gave to the Apostles, as well as persons who were ordained with this same missionary authority, did not know then that floodgates of blasphemy would open for quacks and profiteers to enrich themselves, professing to possess power over the sick, possessed souls, power mongers, fortune seekers and adventurers of all manner. They did not anticipate the extent to which this category of individuals would supplant ordained ministers of the Word of the Lord, and draw away from established churches, millions of Christians who genuinely sought spiritual help for their health needs, social and religious direction. They have realized the need on a stampede, confusion and chaos caused by their paucity of faith, lack of vision, purposeful biblical enquiry sensitivity to the condition of Christians entrusted to their care. These are spiritual matters requiring profound interpersonal prayers and relationship with the Lord.  What went wrong?

The prevalence of mental health challenges, spiritual challenges and social problems afflicting Christians and non-Christians in our society is troubling. Yet, a majority of victims are not even aware of the fact that they may be suffering from these conditions with devastating impact on them, their families and the community at large.  Although many established Churches already had hospitals and social services to provide therapy to the victims of some of these challenges, thousands of clerics who may themselves be suffering from these challenges may not know until the situation leads to cases to suicide ideation or other traumatic experiences before they seek professional help. Some of the situations may be due to spiritual attacks arising from varying situations in life and even evil spirits which are out to destroy.

The complexity of the situations and the lethal nature of these conditions require engaged clerics who are full of faith and the Holy Spirit to lead and help the people of God in their spiritual, mental and physical healing and wellbeing, so that the bodies of God’s people serve as the temple of the Lord for which they were intended.   Father Etienne fully understood and embraced this mission of the Lord.

The clamour for positions and the administration of Church funds has been known to be one of the bane of the missionary mandates of many clerics. He was not distracted by the obstacles he encountered as a minister in the Church of Lord while serving the people of God. He sought no personal wealth, position, personal glory, or easy life of luxury.  He told me that he did not take Church money for himself and that even during times of his travails; he kept complete accurate accounts and records of all Church money which came into his custody. I knew about this because, His Lordship Bishop Lysinge (then Father Lysinge) and I intermittently, acted as confidential peace facilitators during the painful so-called Bojongo crisis.  His Lordship Bishop George Nkwo ( then Fr George Nkwo)  who provided spiritual help to needy Christians and played a very positive rule in crisis management, met me at the Bishop House in Soppo one morning when I came to see the Bishop shortly before rushing to the airport to fly out of the country.

Father Etienne did not seek retribution and bore no rancour against any of his peers or anyone whatsoever, for what was done or not done against him. He perceived his stand as actuated by the adherence to his faith, his mission as an ordained cleric, and the guidance he received from the Holy Spirit. Some persons perceived the problem as a social, administrative or even political problem. More opportunistic and sycophantic persons perceived and used the crisis as ladders to attain personal ambitions and objectives.

In the end, Bishop Pius Awah and Father Etienne thought all of us, that it is unwise to get blindly involved a disagreement between a father and a son.  The presence of retired Bishop Awah on a wheel Chair during the funeral celebration of the deceased father of Father Etienne’s father in Bolifamba Mile 16 brought tears in the eyes of most of the people present.  The news went viral worldwide.  In the end, it was the lesson of the public appearance of father and son during that occasion, which God chose to manifest the magnanimity of his love that has endured than the acrimony that arose on a disagreement on a fundamental matter of faith and mission of the Church.

I met him a number of times in the United States of America.  The first time was during a heavily attended birthday ceremony which was organized for him in Maryland which was attended by many persons from the USA and Canada. The sheer number of persons in attendance and the memorable sermon he gave on that occasion was very touching.   I met him again when he came over to California and was at St Mathias Catholic Church Laham Maryland. I invited him to have a dinner with my family.  We spent about three hours together during which time, he told me how grateful he was, with Bishop Emmanuel Bushu who granted him permission to pursue a very rare specialised course in counselling in a Jesuit University in California. He was grateful for the advice and support of Bishop George Nkuo as well as the support which a distinguished Jesuit Priest in Douala Father Nkeng gave him during moments of dire need in his priestly mission.  He told me that he appreciated the assistance that Arch Bishop Andrew Nkea, then Bishop of Mamfe, gave him during a visit in the US. They both met during the ordination of Reverend Father Achanyi as a Priest of the Diocese of New York.

While in the USA Father Etienne mended many broken matrimonial relationships, counseled people of all nationalities and preached the Holy Word of God in many Churches and occasions.  He healed, counseled, preached and served.  His strength came from his fullness of faith and in the Holy Spirit.  Every person who approached him for healing will related that Father Etienne said that it was God, and God alone who is the ultimate healer, but the afflicted person should have faith in the Lord. He provided special prayers for the personal circumstances of each afflicted person directly from the Holy Bible, and both of them prayed and fast for the healing which often occurred to the glory of the Lord.

He advised me to pray as often as I could at least three times a day because, every time we pray, we invite the angels of the Lord who are always present whenever we call on the name of the Lord. When we sin, they withdraw.  I learned about guardian angels during my catechism days in primary school but did not learn about the circumstances under which they perform the mission assigned to them by God in my life. I did so many years after, through Father Etienne. How many people are conscious of this simple, reality?  We need clerics such as Father Etienne to counsel, and guide us how to sustain the presence of the Holy Spirit of God and the angels of the Lord around us, our homes and communities.  This how we can really keep the devil at bay and in trouble all the time.

A moving moment in our discussion came when I told him how his late mother supported me when I was completing my primary school education in Catholic School Laduma CDC Mukonje Estate. Father Etienne was her only child. She treated me as her own child in the CDC harsh environment.  When we met in Maryland, our both mothers had departed this world to meet God the Creator, leaving us their offspring to continue the spirit of love and service in which they raised us. Father Etienne joined them with a teaming record number of ancestors who preceded them yesterday.

With the death of Father Etienne, the Royal Family of Fontem has lost yet another distinguished son two weeks after we  lost another cousin Dr George Atem (Ndi Nkem Atem Asong) on September 7, 2021). This is the sovereign will of God who created them and indeed all of us for his eternal glory. We bow to His will therefore with all humility and pray for a reprieve, good health and protection over all members of this royal family.

May Father Etienne’s record of service in the fullness of faith and the Holy spirit within the Church and the world at large is greatly appreciated.  He will be missed but his service in the house of the Lord will live forever. May his soul rest in peace

By Chief Charles A. Taku